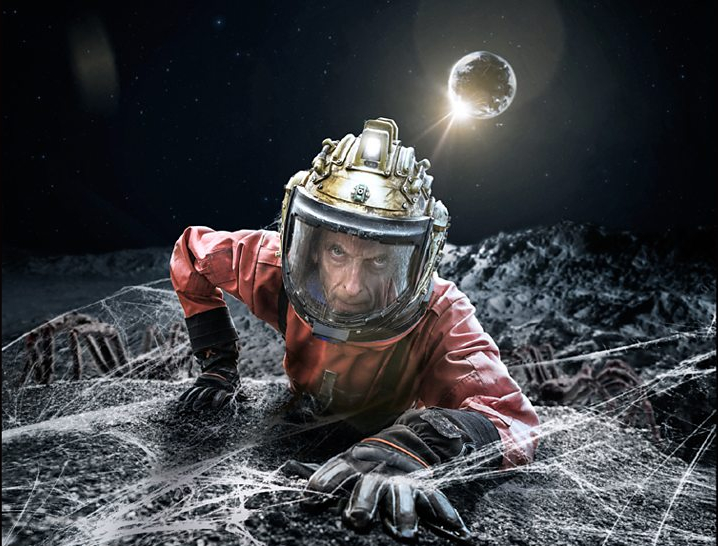 Hello, hello.  Hello Earth.  We have a terrible decision to make.  It’s an uncertain decision, and we don’t have a lot of time.  The man who normally helps, he’s gone.  Maybe he’s not coming back.  In fact, I really think he is.  We’re on our own.  So, an innocent life versus the future of all mankind.  We have forty-five minutes to decide.

The Doctor, Clara and Courtney visit the Moon in 2049, where they discover the Earth’s constant companion is more than another mere celestial body.

I’m not going to deny that this is a very divisive episode of Doctor Who – if you read reviews from professional critics, you’d come away believing that this was a masterpiece, whilst reading reviews written by fans you might be forgiven for believing that it is one of the worst.  I sit somewhere in the middle of all this.  Whilst there are some questionable bits of science and Courtney Woods, I enjoy large portions of this episode.  This story makes me think what my decision would be if I was asked to vote on the fate of a creature that may well destroy the Earth, and the opening 20 minutes have quite a lot of creepy moments.

I’ll start with the negatives.  Courtney Woods is possibly rivalling the Maitland children from Nightmare in Silver for the most annoying child character to feature in the show.  I understand why they bring children into the guest cast for Doctor Who, to appeal to children who, ultimately, are the core audience of the show.  However, a misstep is to make them so mind-bogglingly ambivalent about the situations they are experiencing.  Here, Courtney goes from making quips about the antibacterial spray killing 99% of all germs to wanting to go home.  Equally, the fact that we are told by Clara that the Doctor told Courtney that she is not special rather than shown it is frustrating and feels as though something was cut from the previous episode. If we had been shown the reasoning behind this declaration from the Doctor, it would make us care a lot more about this character.  As it is, she is just there for a lot of the story and I can’t really think of many moments that would have been drastically changed if she hadn’t been included in the story at all.

I know that a lot of criticism is equally laid at the door of the story’s big reveal that the Moon is in fact an egg which is hatching.  This is something that doesn’t bother me too much as I don’t come to Doctor Who for serious scientific ideas, however, this certainly does border on the side of the more comical bits of pseudo-science we have had in the history of the show.  The fact that the creature, once hatched, is able to lay an egg of equal size to replace the now destroyed first moon does border on the ludicrous.

In the mid-twenty first century, humankind starts creeping off into the stars, spreads its way through the galaxy to the very edges of the universe.  And it endures until the end of time.  And it does all that because one day in the year 2049, when it had stopped thinking about going to the stars, something occured that made it look up, not down.  It looked out there into the blackness and it saw something beautiful, something wonderful, that for once it didn’t want to destroy.  And in that one moment, the whole course of history was changed.

One thing the story does well, however, is produce an incredibly dark atmosphere, especially in the opening twenty minutes or so.  The direction, and especially the lighting, are really well done to create this, and it is helped by the spider-like creatures that inhabit the Moon’s surface.  I’ve stated before on this blog that I do not like spiders, and these ones are especially creepy.  This all helps to generate a feeling of unease , which is complemented by Peter Capaldi’s performance.  The story certainly does lose some of this once the egg reveal is made, but it certainly sets out what the production team intended.  I like the fact that this is set in a time where humanity has lost their interest in space travel – the idea of Lundvik and her crew being third-hand astronauts crewing a second-hand spacecraft – and this event is suitably monumental to make humanity wake up and take notice.  I feel that the countdown could have been more dynamic whilst humanity makes its decision though.

The story ultimately hinges on the relationship between the Doctor and Clara, which is helped greatly by the chemistry shared by Peter Capaldi and Jenna Coleman. The Doctor deciding to put the decision into the hands of Clara, Lundvik and Courtney is shocking and it is difficult to imagine any of the other Doctors ever doing this.  Capaldi’s Doctor puts his faith in humanity and more specifically Clara, which ultimately leads to the breakdown of their relationship in the conclusion.  We completely buy Clara’s anger and her feeling that her best friend has abandoned her and we are on her side when she storms out of the TARDIS at the end of the story.  Equally, this arguably marks a turning point in the Twelfth Doctor’s run, as he does begin to soften from this point onwards.  I think that Hermione Norris puts in a decent performance as the jaded astronaut Lundvik as well, and she acted well as a counter to Clara when they are trying to make a decision about how to proceed.

Don’t you ever tell me to mind my language, don’t you ever tell me to take the stablilisers off my bike, and don’t you dare lump me in with the rest of all the little humans you think are so tiny and silly and predictable.  You walk our Earth, Doctor.  You breathe our air.  You make us your friend and that is your Moon too.  And you can damned well help us when we need it.

What, by clearing off?

Yeah, well clear off!  Go on!  You can clear off.  Get back in your lonely…your lonely bloody TARDIS and you don’t come back.

Clara Oswald and the Doctor

6 thoughts on “Kill the Moon”