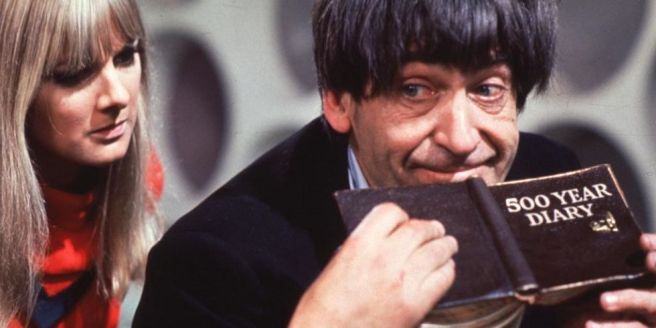 We will get out power!

Following the Doctor’s regeneration into a younger body, the TARDIS lands on Vulcan, where he is mistaken for the Earth Examiner.  The Doctor discovers that Lesterton is attempting to revive three inanimate Daleks that were found in a crashed ship.  The Doctor’s warnings go unheeded, and once reactivated, the Daleks start performing routine tasks around the colony.  However, they have sinister plans of their own.

This is the first Dalek story not to feature a writer’s credit for Terry Nation, and under David Whittaker’s penmanship, the debut of the Second Doctor provides a sense of creeping dread and uncertainty about the new man in possession of the TARDIS key.  The Daleks are posing as helpful for the human inhabitants of a colony on Vulcan, but the Doctor and his companions, mistaken for an examining party sent from Earth, know better.

Firstly, the new Doctor.  The script explains that the process of renewing his appearance (regeneration hadn’t even entered the show’s lexicon at this point) is linked to the TARDIS, but his companions, Ben and Polly are untrusting initially that the younger, cosmic hobo is the same man, and the Doctor doesn’t help himself by referring to himself in the third person a lot, especially in the first part.  However, the fact that the Dalek seems to recognise the Doctor eventually seems to calm most of the doubts in their minds.  It is difficult to say much about the intricacies of Patrick Troughton’s performance, due to the animation, but the vocal performance is superb and I believe that the animation does a commendable job of capturing Troughton’s visual performance.

Within the colony, the other colonists have no reason to trust the Doctor’s protests to Lesterton’s attempts to reactivate the dormant three Daleks that have been found in a capsule, even when one of them is killed by one of the Daleks in a scene which is reminiscent of Frankenstein.  One of the best scenes in the earlier parts of the episode are where the Doctor demands that the Daleks are “broken up or melted down.  Up or down,  I don’t care which, but destroyed!”

The Daleks sell themselves convincingly to the colonists that they are nothing but servants, which is something echoed in Victory of Daleks.  This plot shows the true cunning of the Daleks – even deprived of their gun stalks, they are still a formidable threat and remain plotting, gaining the trust of colonists very easily.  They are also seen as an aid to the rebellion against Governor Hensell, being run by Bragen and Lesterton’s assistant, Janley, which ultimately backfires as the Daleks kill indiscriminately, both members of the rebellion and the loyal forces alike.

The highlight of the episode for me, however, is definitely the production line sequence.  Lesterton enters the capsule, due to increased suspicion thanks to the Doctor’s protests, to discover the Dalek manufacturing more and more Daleks, and to his impending horror, the magnitude of what he has done finally dawns on him.  Unfortunately for the colonists, Lesterton’s discovery is far too late.

The Power of the Daleks is an exceptionally strong episode, and it is a testament to Troughton’s performance that, despite his eccentricities in the first few episodes, he provides a strong performance to convince you by the end of the six parter, that he is indeed the same man who faced the Cybermen in the South Pole, just with a different face.  It is often said by actors who play the Doctor, or felt by fans, that they aren’t the Doctor until they have faced the Daleks, and so it is a true baptism of fire for him as an actor, and he comes through with full marks.

As for the Daleks, we rarely see them so devious, so patient and so cunning as we do here…and it is truly terrifying.

Verdict: An incredibly strong debut for the Second Doctor; with a strong story for the Daleks.  10/10

I think we’d better get out of here before they send us the bill!

One thought on “The Power of the Daleks”