Would you care for some tea?

Responding to Winston Churchill’s call, the Doctor and Amy travel to World War Two where they find the Daleks. But why are they helping the Allied cause? Why don’t they recognise the Doctor? What are the Daleks planning?
Review

When I rewatched Victory of the Daleks for this blog, I realised that I still had vivid memories of watching it on it’s initial transmission in 2010. This may seem bizarre, as it is a divisive entry into Doctor Who canon, but thinking about it, I realised that this was the first Matt Smith story I watched live. I’d been away for the broadcast of the previous two, and having caught up and having been utterly convinced by this new Doctor, sat down excitedly for the next instalment of his adventures. This makes me sound like I was 8. I was actually 18, just about to take my A-Levels and probably in the midst of panicking about exams, university and life beyond. When I came to watch this episode nearly ten years later, my reaction to it was probably about the same as it was then. I’m not going to say that Victory is the best Dalek story that the new series or the original have produced, however, I feel it does get a rough ride. Matt Smith puts in a good performance as the Doctor, as does Karen Gillan as Amy, and the guest stars of Ian McNeice and Bill Paterson certainly help this story along. It is hindered by some poor direction in places by Andrew Gunn, and I really feel this story could have benefitted from being a two-parter.

Listen to me. Just listen. The Daleks have no conscience. No mercy. No pity. They are my oldest and deadliest enemy. You can not trust them.

If Hitler invaded Hell, I would give a favourable reference to the Devil.

I’ll talk about the elements of the episode that I’m not so keen on first of all. This story definitely feels too short, and at forty minutes it feels as though something is definitely missing. There is potentially more to be done with the Daleks posing as Bracewell’s Ironsides, and in my mind, if this were a two-parter, perhaps either the Doctor’s “testimony” or the reveal of the New Dalek Paradigm would have been a good place for the end of the first part. Additionally, I’m not a fan of the direction of Andrew Gunn here, especially of the scene in which the Eleventh Doctor confronts the Daleks triggering his testimony. Equally the Cabinet War Rooms feel a bit too wide and open as opposed to claustrophobic and the Dalek ship, supposed to be ramshackle and damaged from the climax of Journey’s End feels extremely overlit. However, I do like the scene in which Churchill, Amy and the Doctor are discussing the Daleks and a sole Dalek wheels by. In Steven Moffat’s interview after his departure as showrunner, he did say that he felt that he had taken his eye off this block of episodes, and it does certainly show in some regards. The design of the new Dalek Paradigm did not bother me at the time and still to this day does not bother me too much and I really wish that we learnt what the purpose of an Eternal Dalek was (come on Big Finish!). Nick Briggs does modify his original Dalek voice to being slightly deeper and booming which makes them feel more menacing.

One of the more positive parts of this episode is the fact that it marks the end of a run of stories that see the Daleks as scavengers, a side effect of the Time War. This is the start of something that I like about the Moffat era in general is that there is a greater feeling of a wider universe. With this story depicting a rare and relative victory for the Daleks, it kickstarts a new Dalek empire and leads to the Alliance being set up at the end of the series. The stories since the Time War that have featured one last surviving Dalek are all very well and effective, but a regenerated race of Daleks to fight against a relatively newly regenerated Doctor is a potentially frightening prospect for the universe. I am not overly enamoured with the climax with the Bracewell bomb, although I do like Karen Gillan’s delivery of the line “Hey Paisley. Ever fancied someone you shouldn’t have?” and additionally, the Spitfires in space sequence is a bit silly but is a nice idea. The idea of the Daleks acting as servants to the British army is an obvious homage to Power of the Daleks, and part of me wishes that it did go on for a bit longer.

The central and guest performances are strong in this story again. Matt Smith gives a particularly commendable performance as the Doctor, battling with his guilt when he realises that he is responsible for this new, shiny, multicoloured variety of Daleks. He is particularly good in the scene where the Supreme Dalek gives him the ultimatum – he can destroy the Dalek ship and condemn the Earth to destruction, or let the Daleks escape and potentially save the world. Of course, there is no doubt that the Doctor will save the world, but Smith’s performance makes you believe that this is really a choice that the Doctor is really grappling with. Karen Gillan is good here too, and the fact that she does not remember the Daleks works really well as it isolates the Doctor when he is warning of the threat. This also is the first story to demonstrate to Amy the dangers of travelling with the Doctor, as the fairytale feel of this series falls away with the arrival of the Dalek. Ian McNeice and Bill Patterson also put in good supporting performances, with small to medium size roles, making them feel really memorable.

Verdict: Victory of the Daleks does fluff it’s lines a little but allows us to see Matt Smith taking on the Doctor’s most famous adversary. 6/10

The scene in which the Supreme Dalek gives the Doctor his ultimatum.
Best Quote

What are you talking about, testimony?

The Eleventh Doctor and a Dalek 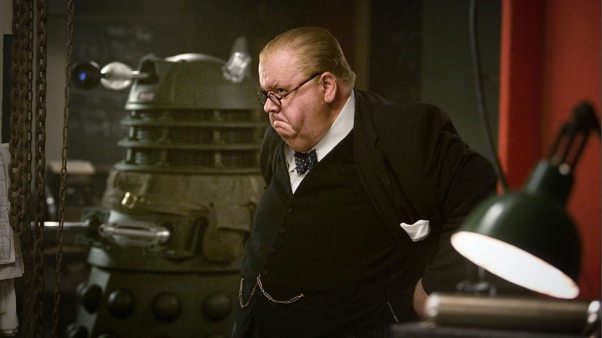 View all posts by eddsutch92