Warning: This review contains spoilers for It Takes You Away. If you haven’t seen it yet, come back after watching.

Is it me or is this woman completely mad?

On the edge of a Norwegian fjord in the present day, the Doctor, Ryan, Graham and Yaz discover a boarded-up cottage and a girl named Hanne in need of their help. What has happened here? What monster lurks in the woods around the cottage – and beyond?
Review

From the beginning, It Takes You Away seems to be formulaic Doctor Who. The audience are presented with a boarded-up house, an abandoned girl and a monster in the woods. Then the narrative leaps off in a completely different direction, giving us one of the first episodes of this series to give us a big science fiction concept, and an examination of loss and grief again. The episode focuses on Hanne, a blind girl who is terrified by a creature in the woods outside her house, and it is a superb performance from Eleanor Wallwork. It is rare to see Doctor Who defy expectations like this, and this is a strong debut story from Ed Hime. This is the last story to be written by a guest this series, and I feel that these stories have been amongst the strongest of this latest batch of Doctor Who episodes. As far as I am concerned, Malorie Blackman, Pete McTighe, Joy Wilkinson, Ed Hime and Vijay Patel can all come back whenever their schedules allow. 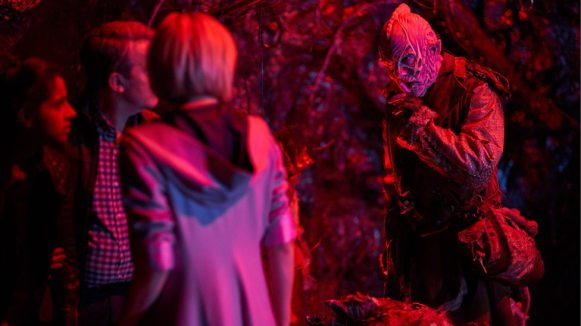 The story here is particularly intriguing. It seems to start as a Scandi Noir thriller but then twists and turns into a plot around an alternative plane of existence which gives both Graham and Erik the temptation of living their perfect life with their deceased loved ones. In the early stages, it benefits from good direction from Jamie Childs, evoking horror tropes and making us truly believe that there is a monster, which helps to make the twist all the more effective when Ryan realises that the sounds that they have heard up to this point are just a recording. I like that there is a distinctly different colour palate in each of the three main settings: the main universe is quite muted and bleak, the Anti-Zone is bathed in dark shades of purple and red, whilst the parallel universe is bright. There are also lovely moments of humour in this story, such as the reveal that Graham has been carrying around sandwiches. There are some fantastic scary moments and I thought that the Flesh Moths are quite a creepy idea and keep a sense of stakes in the Anti-Zone, whilst Kevin Eldon is pretty fantastic as Ribbons who is unpredictable and horrible. I think the shot of a Flesh Moth crawling out of his eye socket is going to stick with me for a long time. I’ve also spent a lot of time thinking about the Solitract taking the form of a frog in its final exchanges with the Doctor, which initially did bother me, but on rewatching, I think that I’m either thinking about it too much or it is a perfectly reasonable thing for a sentient universe to take the form of. Perhaps I was expecting a returning character to face the Doctor instead but I’ve finally reconciled myself to this decision. Maybe this is why this review is so late! 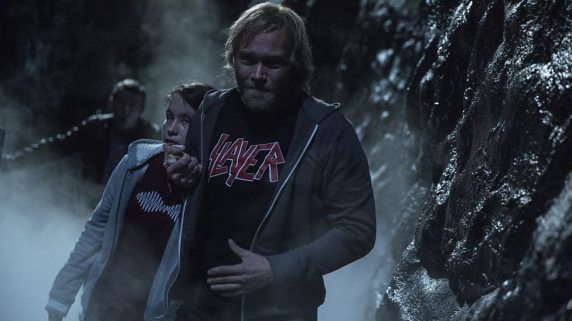 Hanne might just be one of the strongest one-off characters we’ve had this series, who is constantly underestimated by the Doctor and her companions. She is able to instantly sense that something is wrong with the universe that she arrives in and the copy of her mother is a fake. Despite being blind, she is also incredibly perceptive and able to tell that Ryan is lying to her about the message that the Doctor wrote on the wall and about their surroundings when they are walking through the Anti-Zone. It is this message that seems to really impact Erik and realise how selfish he has been by wanting to stay in the parallel universe. It’s not a complete redemption of his character, but it does at least give her character the chance of a better future. It’s a really great guest performance from Eleanor Wallwork in a series that has had a particularly good guest cast.

From the point of view of the companions, the biggest moment of consequence was the fact that Ryan finally acknowledges Graham as his grandfather, a plot thread that I wasn’t expected to be resolved until next week’s finale. We also see the return of Grace in the Solitract Plane, and I believe that Bradley Walsh gives one of his best performances as Graham here. His reaction when he sees Grace is so heartbreakingly played and the conversation between the two of them where he can’t believe that his dead wife is in front of him. I am surprised by how much Graham has grown and developed from a character that I initially found a bit irritating into the beating heart of the TARDIS crew. One of the few issues I have with this story is that it takes so long for Graham to come to the realisation that this Grace isn’t real after she prevents them from re-opening the portal to save Ryan. However, in my mind, I’ve rationalised this as Graham still recovering from the shock of seeing his dead wife only to be told that they can’t be reunited in the main universe and it is only the second time that Grace seems indifferent to Ryan’s fate that he finally gets the message through. Ryan gets some good characterisation, although I’m not sure about him dragging Hanne around to stop going through the portal, but his theory about what has happened to her father does prove to be correct, however cynical it could seem to be. Yet again, Yaz gets the short straw here with little time spent here, but I appreciated the little touches – the fact that, of the TARDIS crew, she is the best at handling children due to her police training and that when Ribbons holds Graham at knifepoint, she is quick to try and act to defuse the situation. She is also quite a good sounding board for the Doctor to fire ideas against and she asks the right questions to enable the Doctor to work out what the parallel dimension is.

Don’t do this to me.

It’s another good performance from Jodie Whittaker again as the Doctor and it is clear here that she really has the feel for the character. Something that I really like about the Doctor, and it’s something that I really liked about Matt Smith as the Doctor, is appreciating the beauty of really weird aliens, and it’s something that Whittaker does really well here. The Doctor here is prepared to sacrifice her future travelling around in the TARDIS, and the interchange between her and the Solitract is really nicely played, and her frustration at having to leave despite having only “scratched the surface” of the Solitract universe and she does seem to be sincerely sorry about abandoning the Solitract to its solitary existence. It’s always nice to have a bit more of a delve into the Doctor’s past and childhood and here we get the revelation that the Doctor had seven grandmothers, and I quite like the throwaway line about the seventh believing the second grandmother to be a Zygon spy!

She’s not your wife! She’s furniture with a pulse!

Verdict: With great performances from Bradley Walsh and Jodie Whittaker and a rug pull I did not see coming, It Takes You Away is a great and moving story. 7/10

Either the discussion between the Doctor and the frog, or the conversation between Graham and Ryan at the end of the episode.
Best Quote

Your gran told you this as a bedtime story?

Only when I had trouble sleeping.