This post contains spoilers for The Haunting of Villa Diodati.  If you’ve not seen it yet, come back after watching!

Save the poet, save the Universe.

Lake Geneva, 1816.  Lord Byron and the Shelleys prepare for a night telling ghost stories, but their villa seems to have ghostly presences all of its own.

It’s probably to the benefit of this story that it has broadcast on a weekend where the UK has been suffering under the winds and rain of ‘Storm Dennis’ and also that it coincided with the release of another period drama (Emma.)  However, I think that this might just be my favourite television Cyberman story – possibly jointly with World Enough and Time and The Doctor Falls.  I love the way that this takes the tropes of a haunted house story and twists them neatly with the inclusion of the Lone Cyberman, and this is certainly the creepiest story of the Whittaker era to date.

Maxine Alderton’s debut story for the show is pretty damned strong.  She does some good initial work, setting up the guest cast of Lord Byron, the Shelleys, Claire Clairmont and Doctor Polidori early on through the cold open, the dancing scene and the scene with Ryan, Mary and Polidori at the piano, allowing everyone a satisfactory introduction.  Byron seems to get more of the lion’s share of the story than the Shelleys though which did bug me a little. The story does revert to somewhat standard haunted house and horror movie tropes, however, I really like the idea of the interior of the Villa being changed to make it into a ‘panic room’ for the Guardian of the Cyberium.  Despite the tone of this story being creepy and grim in places – especially the moment that the Cyberman picks up Mary’s infant son William – there is still some room for humour, with most of these moments being given to Graham, allowing Bradley Walsh to really shine.  These are helped by some good direction by Emma Sullivan, who emphasises gags like the one below with some good visual moments too – the looks that the Doctor and Graham shoot each other are fantastic.  Another example is the look that Fletcher shoots the Doctor when she tastes the dust from the destroyed disembodied hand.  The direction also helps with the fear factor too, which helps give the villain of the piece some real threat.

Yes, because it is a truth universally acknowledged…

…that one’s driver will park one’s carriage imprudently too far from whence one is going.

Graham O’Brien and the Thirteenth Doctor

We get to see the Lone Cyberman, who was first mentioned in Fugitive of the Judoon by Captain Jack Harkness.  The design on this is fantastic giving us a drastically different Cyberman to the ones that we have seen previously.  This Cyberman is incomplete, showing more organic components than we have seen previously from usual Cybermen and this emphasises the body horror that is core to what makes this enemy of the Doctor so scary.  Like with the Daleks, it is good to have a story that stresses that even just the one Cyberman is enough of a threat which this certainly does.  The moment that Mary confronts the Cyberman to try and get him to address his humanity is fantastic and stresses that emotions like love aren’t going to provide us with a simple solution like previously, only for the Cyberman to reveal that he only spared Mary’s son because he’s a “pathetic runt” is really effective.  I like the fact that the Cyberman trying to come back through time is causing things like the weather, but equally the reveal that the ghosts that Graham was seeing weren’t part of this is a really nice moment.

Are you the Guardian?

The Lone Cyberman and Fletcher

With regards to the Doctor and her companions, this story puts them into a really interesting place heading into the finale.  The Doctor and her companions are brought into conflict regarding Jack’s message about the Lone Cyberman, with Ryan stating that sacrificing Shelley’s life would save billions, which leads the Doctor into a speech which is probably the best part of the episode.  This really highlights the burden on her shoulders as a Time Lord in trying to weigh up what the right thing is to do, and with the ramifications of letting the Lone Cyberman get what it wants clearly pretty disastrous, the Doctor must be pretty confident in her abilities to atone for her error.  There have been more moments of conflict between the Doctor, Yaz, Ryan and Graham this series, which is an improvement on last series.  She did get some lighter material as well and is particularly enjoyable in her scenes opposite Byron.  Meanwhile, the companions do get like some nice individual moments in the story, with Ryan talking to Mary at the piano, Graham’s hunt for the toilet revealing the first moments of the haunting of the house and Yaz with Claire Clairmont.

This enigmatic person of yours – would you trade them for reliable and dull?

My person’s a bit different.

Verdict: A really enjoyable haunted house story with a science fiction twist, The Haunting of Villa Diodati continues a strong second series for Jodie Whittaker and is amongst the best television Cybermen stories. 10/10

The discussion in the cellar regarding what to do with the Cyberium and Shelley – see below.  It’s a great moment which shows how the Doctor’s decision is not simple and I’m intrigued to see how this series will wrap up!

I can’t keep him away much longer.

Jack isn’t here, stuck in a house with that.

Exactly.  You didn’t want us near it a minute ago.

I’ve just been inside his brain.  there’s a super-computer fused to a cerebral cortex.  He’s the only one who knows how to get that out!

Don’t let the Cyberman have what it wants.

I know, because armies will rise and billions will die.

Shelley’s going to die if that stuff stays inside him.

Shelley’s only one life against all those others.

What are you saying?  How can you condemn him to death like that?

But is he, Ryan?  His thoughts, his words inspire thousands for centuries.  If he dies now, who knows what damage that will have on future history?  Wordes matter.  One death, one ripple and history will change in a blink.  The future will not be the world you know.  The world you came from, the world you were created in won’t exist, so neither will you.  It’s not just his life at stake.  It’s yours.  You want to sacrifice yourself for this?  You want me to sacrifice you?  You want to call it?  Do it now.  All of you.  Yeah.  Cos sometimes this team structure isn’t flat.  It’s mountainous, with me at the summit, in the stratosphere.  Alone.  Left to choose.  Save the poet, save the universe.  Watch people burn now or tomorrow.  Sometimes, even I can’t win. 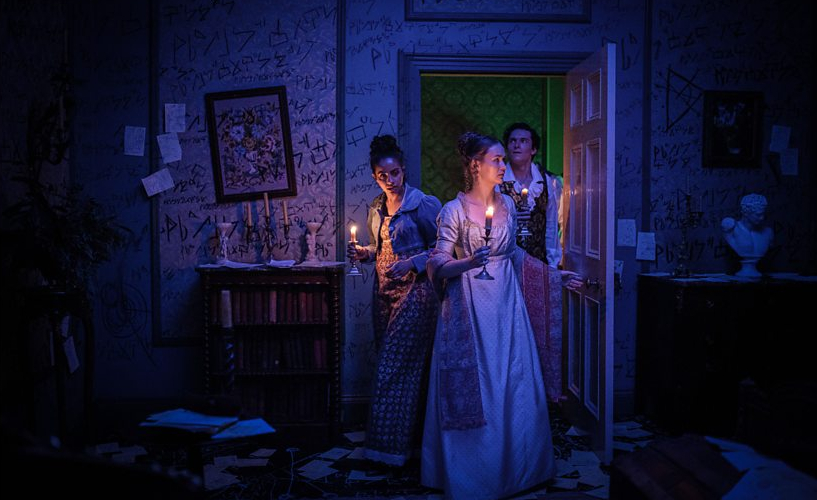