The illusion is always one of normality.

When a Concorde disappears through a crack in time, the Doctor, Nyssa and Tegan take another Concorde to follow, unaware that a mysterious conjuror Kalid is waiting for them.

After the explosive climax to Earthshock, the conclusion to Peter Davison’s first season as the Doctor is difficult to describe as anything other than a letdown.  Time-Flight has a reputation that certainly precedes it – I was certainly aware that this was not a great story before watching this story – and it is frustrating to see Davison’s Doctor hampered by stories like this and Black Orchid.

This is certainly an example of the show having ambition well in advance of its meagre budget.  Aspects like the landscape of pre-historic Earth and the prop Concorde landing gear look laughable and very much like a set in front of a matt painting.  Additionally, filming onboard Concorde itself seems to, like a lot of the John Nathan-Turner era, have been done for reasons of generating publicity rather than considering the practicalities of it.  The scenes shot in the cabin and the flight deck of Concorde look very claustrophobic and not easy to work in – there is one scene with the Doctor talking to the flight crew which feels as though the camera is literally right behind Peter Davison.  The one thing that does look like money has been spent on it is the Master’s disguise as Kalid, which does look rather impressive, even though it is only used for the first two parts.  Given the scope of the story and the cast and production team’s seeming antipathy towards this serial, it is perhaps surprising that one of the script editors or John Nathan-Turner suggested holding it over to the next season in order to do this story full justice. 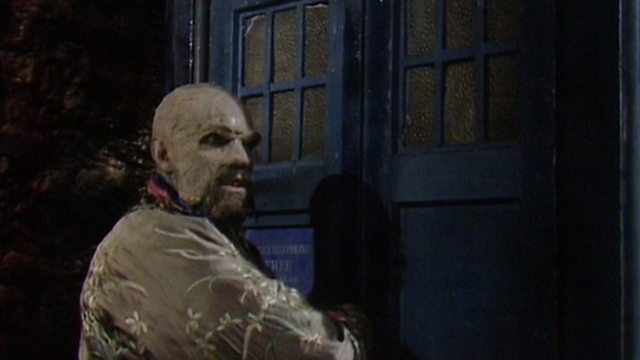 Peter Grimwade’s story is certainly ambitious, however, it is safe to say that his writing is not as good as his direction, and the narrative is full of characters that feel superfluous.  I do feel that this is not entirely his fault though, as this story is unfortunate to follow Earthshock and doesn’t entirely deal with the death of Adric satisfactorily.  This isn’t a problem exclusive to Doctor Who.  For those of you unfamiliar with your James Bond films, Blofeld kills Bond’s new bride in the closing minutes of On Her Majesty’s Secret Service, yet when James Bond returned in Diamonds Are Forever, he acts as though the worst thing Blofeld has ever done is park in his space.  The story does certainly start with a sombre tone, picking up straight after the Doctor has dropped off the survivors of the encounter with the Cybermen, but this does get quite rapidly dropped as a plot element.  I’ve heard that the Master originally was not supposed to feature and was a late addition and this certainly makes quite a lot of sense.  His appearance here does seem quite derivative of his earlier appearance in Castrovalva, especially considering that he spent most of his time in disguise in that story too.  Grimwade’s story does have some interesting ideas, like the Xeraphin and the Jekyll and Hyde style relationship that seems to dog their race, however, there are too many other things going on here to go into it in further details.

There is quite a large cast here but a lot of them aren’t given an awful lot to do, with the Master mind-controlling the majority of the passengers and crew of the first Concorde, and Nyssa and Tegan largely sidelined.  However, there are four standout performances that mean that this story isn’t absolutely dreadful.  The first is Peter Davison, who really throws himself into the story despite his personal feelings towards the story.  The second is Anthony Ainley, who, though the Master doesn’t really need to be in this story, brings a suitable sense of pantomime menace to proceedings.  The third and fourth are Richard Easton and Nigel Stock as Captain Stapley and Professor Hayter.  Richard Easton portrays such a likable character who falls completely under the spell of this energetic and youthful Doctor and is eager to help as evidenced in the scenes where he attempts to thwart the Master taking parts of the Doctor’s TARDIS.  Nigel Stock brings some cynicism and some wonderful barbs into the episode which does not really give the actors very much to work with.

Verdict: Time-Flight brings Davison’s first season as the Doctor to a somewhat lacklustre conclusion.  An ambitious story which should perhaps have been refused on grounds of practicalities, however, it does feature some good performances from Davison, Ainley, Easton and Stock. 2/10

The scenes in Part One with the Doctor, Nyssa and Tegan at Heathrow Airport are good – I especially like how quick the Doctor is to be accepted by the authorities after namedropping UNIT and the Brigadier.

I thought you were going with the Doctor.