I wish I could understand you, Doctor. One moment you’re accusing us, and the next, you’re playing the perfect butler.

After leaving Skaro, the TARDIS team begin acting strangely and unexplained events occur, which cause the crew to become suspicious of each other.
Review

The Edge of Destruction is a critically important episode for Doctor Who at an early stage of it’s history. In the two previous stories, we were presented with a main protagonist in the Doctor who was distinctly unlikeable, erratic and arrogant, with a dysfunctional TARDIS team around him. This story, a late addition to production, allows the Doctor to see that he actually needs Ian and Barbara around in his travels, along with hinting at the true nature of the Doctor’s ship. This Doctor’s fundamental nature of being untrusting and untrustworthy does not suddenly change, but it is important to remember that this Doctor is inexperienced and vulnerable too, and this is the first story to demonstrate it. 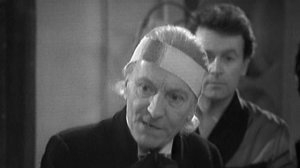 This story also has one of the smallest casts in Doctor Who history, and with the four leads experiencing amnesia following the conclusion of The Daleks, the first part feels very eerie and disconcerting. The decision not to have any noise in the opening console room scenes are very effective and puts the audience on edge here, as it makes this almost homely environment seem so much more alien. The writing also divides the characters into pairs in the first part, almost playing off horror movie tropes to ramp up the tension, where as soon as one character wakes up, the characters are split up again. It feels as though this is more of a stage play than a television episode at points in the first part, and it is clear that Hartnell, Hill, and after a fashion, Russell are more comfortable in this environment than Ford is. Despite this, the story is impressive when viewed as being a rushed job and works remarkably well.

I feel it would be an oversight to talk about this story without mentioning the controversial scissors scene with Susan. I feel that this scene was really well directed by Richard Martin with some great striking imagery and the effectiveness of the shadow cast behind the actors adding to the tone of the scene. I also like the camera coming in and out of focus from Susan’s point of view. However, I can see why it was controversial though, with Susan threatening Ian and Barbara with a rather large pair of scissors, with the BBC keen to avoid imitative behaviour. It certainly does feel like a line has been crossed, not for the last time. In general, the direction in the second part is better than in the first – there are too many static shots which didn’t really work for me. Cox’s direction is better, and I in particular found the shot of the Doctor delivering his monologue about the Big Bang particularly effective. This meets the original remit of the show being educational. The ultimate resolution of the show being a faulty spring has been highlighted elsewhere as being underwhelming but I quite appreciate it. It helps demonstrate the inexperience of the Doctor and the way the TARDIS tries to warn them adds to the mystery about his wonderful machine.

Accuse us! You ought to go down on your knees and thank us! Gratitude’s the last thing you’ll ever have…or any sort of common sense either!

Comfortably the best part of the episode is the argument between the Doctor, Barbara and Ian at the start of the second part. There has been tension festering between these three for the last two serials, and here it comes to a head with the Doctor unable to accept that he may have been affected by the weird happenings on the ship and unwilling to accept any other explanation than Ian and Barbara being responsible. When Barbara finally does snap at him, highlighting the times that Ian and Barbara have saved him, it does seem to trigger a change in his character. It feels like a perfectly justified attack on this incarnation of the Doctor, and I really like the scene where he apologises to Barbara. This does serve an important character moment which is crucial for the incarnation as well as the show overall. The Doctor does not understand his TARDIS fully, not knowing that it is alive and not having all the answers and needs the help of a team all on the same page.

Verdict: Strong central performance from Hartnell helps to lift this four hander, which feels quite significant for the show in general. It can’t help but feel a bit like filler though. 7/10

Parts: 2 (The Edge of Destruction and The Brink of Disaster)

We’re at the very beginning, the new start of a solar system. Outside, the atoms are rushing towards each other. Fusing, coagulating, until minute little collections of matter are created. And so the process goes on, and on until dust is formed. Dust then becomes solid entity. A new birth of a sun and its planets.