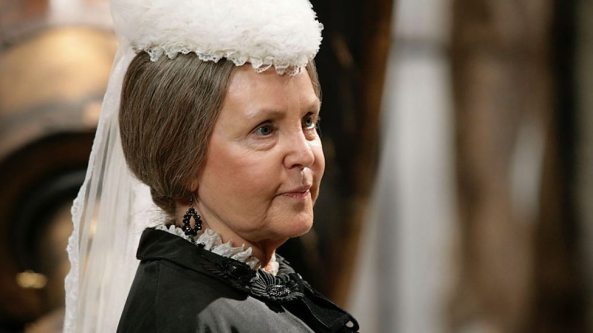 You want weapons?  We’re in a library!  Books! The best weapon in the world.  This room’s the greatest arsenal we could ever have.  Arm yourselves!

Accidentally ending up in 1876, the Doctor and Rose find themselves trying to keep Queen Victoria safe from a mysterious order of monks and a werewolf.

It’s quite rare for a new Doctor to hit the ground running for me – in the complete rankings of their debuts stories so far, only Patrick Troughton, Jon Pertwee and Matt Smith have had 10/10 scoring.  Upon rewatching David Tennant’s era, I’ve realised quite how long it takes for him to feel like the Doctor, but happily, Tooth and Claw, for me is the moment he truly inhabits the role.  I must stress that this era was my entry point into watching the show, albeit later in this series – I remember seeing a bit of The Impossible Planet and then nothing until Doomsday – so I do have a lot of fondness for this Doctor.  From here on the quality does (by and large) improve, and while I still have issues with his relationship with Rose, Tennant seems more assured in the role here.

Is that the Koh-i-noor?

Oh yes.  The greatest diamond in the world.

Given to me as the spoils of war.  Perhaps its legend is now coming true.  It is said whoever owns it must surely die.

Well, that’s true of anything if you wait long enough.

Speaking of the Tenth Doctor, this is quite a significant episode for this incarnation.  We see his sorrow at his status as the last of the Time Lords during Victoria’s speech about her late husband, Albert, as well as seeing this Doctor’s fondness for 20th Century culture and his propensity for licking object to ascertain their chemical make-up.  I feel that this is a better demonstration of the kind of man that the Tenth Doctor is developing into and Tennant certainly gives a good performance here.  I like his enthusiasm about the telescope and his disappointment when he realises that it is “a bit rubbish”, but my favourite moment of his in this episode is where he first sees the werewolf/Lupin Waveform and states that it is beautiful.  This is one of my favourite things about the Doctor and moments like this are really lovely, and allude to the reason why the Doctor left Gallifrey in the first place.

This story shows the establishment of the organisation of the Torchwood Institute, the arc for series 2, which we first heard mentioned in Bad Wolf in Series One, but I do feel that the story doesn’t really do enough to justify Queen Victoria’s decision to set up the organisation to counter the Doctor in the closing moments.  The Doctor’s banishment feels really sudden, especially following immediately on the heels of his and Rose’s knighthood.  Otherwise, considering the story was a rushed job, it stands up surprisingly well.  The story is quite scary in places and certainly gripping, aided by the two stars and guest performances such as that of Pauline Collins as Queen Victoria.  I like how real-world elements are worked into the story here, such as the Koh-i-noor diamond and that the plot is based around an assassination attempt on the monarch, as well as elements from fantasy novels about werewolves, such as the full moon, silver bullets and the lesser known element of mistletoe being used as a deterrent for the creature.  I also really like the fact that Sir Robert does get redemption in the end, as he is put into a difficult position by both the Queen and the monks, but dies with honour saving his monarch.

I saw last night that Great Britain has enemies beyond imagination.  And we must defend our borders on all sides.  I propose an institute.  To investigate these strange happenings and to fight them.  I will call it Torchwood.  The Torchwood Institute.  And if this Doctor should return, then he should beware.  Because Torchwood will be waiting.

The villains of the piece also really stand out here.  The opening sequence with the monks fighting against Sir Robert’s household staff is really well choreographed and visually striking, making them seem like an effective foe.  The performance of Tom Smith as the Host is particularly unnerving and particularly memorable, although it is brief.  The delivery of the lines is very creepy and the transformation effects are particularly effective moments of body horror.  When it comes to the werewolf, the CGI really stands up and helps it feel like a real and believable threat, which does help the story.

Verdict: A solid episode if not exceptional, Tooth and Claw is an important episode in terms of the second series and Tennant’s era in general.  7/10

When the Doctor sees the werewolf for the first time.

I’m sorry Ma’am.  It’s all my fault.  I should’ve sent you away.  I tried to suggest something was wrong.  I thought you might notice.  Did you think there was nothing strange about my household staff?

Well, they were bald, athletic – your wife’s away, I just thought you were happy.

Sir Robert and the Tenth Doctor