This review contains spoilers for Orphan 55 and series 12 so far.  If you are not up to date, please come back after you’ve seen it. 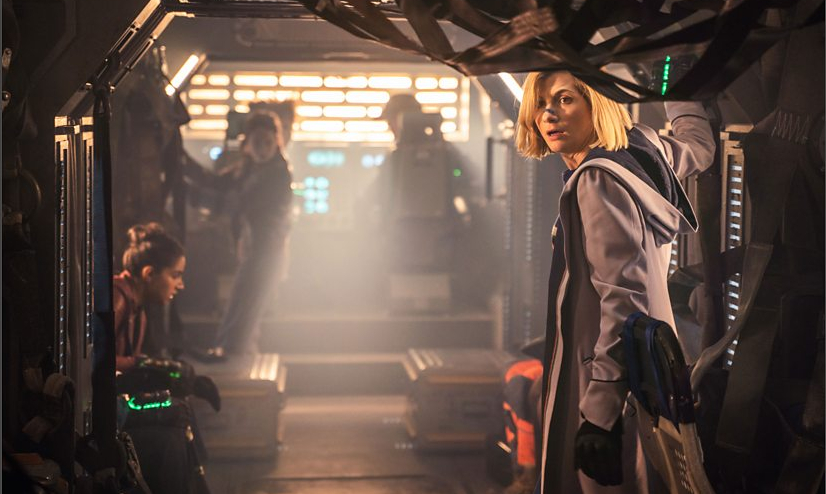 The Doctor, Yaz, Ryan and Graham find themselves at Tranquility Spa – but the relaxing atmosphere is soon disrupted by an attack by the Dregs.

I had high hopes for Ed Hime’s second episode of Doctor Who, especially after really enjoying It Takes You Away in Jodie Whittaker’s first series as the titular Time Lord.  Orphan 55 is a different beast in several ways and, whereas It Takes You Away was a small story concerning grief after the loss of a loved one, this episode has a strong environmental message that feels incredibly relevant after the fires in Australia.  I wish I could say that I feel that this story was as strong as his previous work, however, sadly I did feel this episode dragging and, contrary to what the production team probably wanted, quite forgettable and predictable.

One of the story’s biggest problems is that it does boast a large guest cast for a one-part story and this makes it quite difficult to get attached and care too much about them.  I am aware that I probably sound heartless, but I found both Julia Foster and Col Farrell utterly tedious as Vilma and Benni respectably and a perfect case in point as to why this episode felt predictable.  As soon as Yaz interrupts Benni’s attempted proposal, the audience instinctively knows that one of them or both are ultimately doomed.  And that’s before Vilma screeching Benni’s name at every opportunity.  I’m not sure if this is down to poor acting or poor writing.  James Buckley, probably best known for his role in The Inbetweeners, felt at best let down by the script or at worst, woefully miscast in his part as Nevi, with the only memorable element being his green wig.   I feel that, with a smaller guest cast, this story could have really landed a hit – maybe with a larger cull of characters in the beginning attack by the Dregs, which would really bring home the threat that they pose.  Sadly, too many members of the cast feel like they are utterly disposable to the core of the story which is ultimately driving a message home about the threat of climate change and the ultimate bond of family.  Ultimately, this story would have worked a lot better as a multi-part story, with the relationships between them all being allowed to breathe a bit more, feel a bit more natural and give the audience someone to care about.

The story does really rely on its two plot twists, one of which is good and unexpected, the other one felt utterly predictable.  I will first come to the one that I felt worked better – the reveal around Bella’s relationship with her mother, Tranquility Spa’s boss, Kane.  Bella’s motives around destroying the Spa seem sketchy at best and a strange way of getting back at an absent mother, however, this largely worked much better, although a potential repetition of a ‘good’ character turning out to be a villain does feel a bit tedious.  The second is that the planet playing host to the Spa is actually the Earth and this leads to possibly the clunkiest ending possible – the Doctor delivering a message about taking responsibility for the planet directly to camera.  At best, this twist has best intentions at heart and I want to emphasize that I have absolutely no issues with the message that it is conveying, however, it feels as though you are constantly being walloped over the head with a mallet with it.  The idea behind the story is fundamentally sound, but the execution is flawed.  It may have potentially worked better to have the planet be any other planet than Earth because it really does not land the desired emotional punch.  If I’m being charitable, it feels as though the production team are trying to almost level the playing field between the Doctor and her companions – as both have now witnessed the desolation of their home planets – but I feel that it almost would have worked better using another planet than Earth.  It doesn’t help that this feels really poorly paced, with the middle really dragging.

The above being said, it must be said that in his defence, Ed Hime can write a fairly standard Doctor Who story quite well – he seems to understand the dynamic between this Doctor and her companions.  I really like the moment where Yaz quizzes Ryan about what he is discussing with Bella but I would love to see this continue as having a brother-sister dynamic than the romantic one the show seems to be considering.  Jodie Whittaker’s Doctor puts in another good performance commanding scenes and I did enjoy the moment that when the companions first arrive at the Spa and the Doctor finds herself alone and Graham is also good.  The four manage to work well, despite the story not being a classic.

I also really like the Dregs and I feel that the creature design is superbly done, even if I don’t like the ultimate reveal of their identity.  The scenes with them attacking the spa in the episode’s opening moments are great, packed with threat and menace, and the attack on the transport is superb, evoking moments of Midnight and I really liked the fact that they breathe carbon dioxide and breathe out oxygen – I think this is quite a nice idea.  It’s just a shame that the high production value on these costumes isn’t replicated elsewhere in the episode, with the green wigs a particular issue here.

Verdict: A story that will be remembered for a clunky ending rather than anything else.  Despite an interesting idea and strong performances from the four leads, Orphan 55 feels like it rather labours the point.  4/10

The scenes with the Dregs attacking the transport are probably one of the best parts of this episode.

In your time, people sat at home arguing about the washing up while the house burnt down.