This post contains spoilers for Praxeus.  If you haven’t seen the episode yet, come back once you have!

OK.  So with the understanding that was pretty alarming, don’t be overly alarmed.

What connects a missing astronaut in the Indian Ocean, birds behaving strangely in Peru and a US naval officer washing up on a beach on the island of Madagascar.

After the bombastic nature of last week’s story, Praxeus may seem a bit more by the numbers for the Chibnall era, especially with its story evoking contemporary issues relating to climate change and pollution.  In this way, it seems as though the obvious story to compare it to is Orphan 55, however, this feels much more cohesive than the third episode of this series and I generally had a better time watching it.  This story manages a large guest cast better than the former story and I certainly felt much more engaged with this.  It’s not perfect, but it is a good fun romp.

I’ve spoken in reviews of previous episodes how much I have enjoyed the fact that the writers and production team seem to have realised that the companions are allowed to be separated from the Doctor for prolonged amounts of time and this story starts with the companions separated from her from the off.  This allows for interactions between the companions sorely lacking from the last series and having Graham and Yaz being together, with Ryan being on his own did all involved all sorts of favours.  The biggest beneficiary of this is Yaz, who ultimately gets to go off and explore the Praxeus facility under the Indian Ocean, accompanied only by guest travel vlogger Gabriela.  This allows the writers a chance to show how far Yaz has come since travelling with the Doctor and gives her a de facto companion.  Graham continues to be the show’s biggest asset, bringing some light comedy to some darker moments, such as when he is revealed to be holding a device telling him there’s unusual activity on the other side of a wall, only for Yaz to gently reveal that he’s holding the device the upside down.  This fish out of water material does really help endear Graham to the audience, especially when Yaz and Ryan seem much more capable of taking the weird and wonderful life of travelling with the Doctor in their stride.  Ryan also benefits from spending time away from the Doctor, also spending time towards the start of the story with Gabriela in Peru, although there is definitely a lot of repetition of Ryan and guest female characters spending time together, usually on the TARDIS this series, which is starting to show through.  I still think that one member of this TARDIS team will be leaving at the end of this series, although I’m not sure who I want it to be anymore – I was pretty sure I wanted Ryan to leave, but now I’m pretty attached to all three of them.

Like Resolution and Spyfall before it, Praxeus is a story with a global scope and it isn’t afraid to show it off, with the story moving at a pace to match the globe-trotting antics of the Doctor and her friends.  I think the fast-paced start helped me along with the story, although some parts do feel as though they drag, for instance the scene with Ryan and Gabriela in the hospital.  There is also a sizeable guest cast here, but they do feel as though they get enough time to be fully rounded.  Warren Brown’s Jake is particularly interesting as a policeman on sabbatical, who feels out of place when compared to his husband, the missing ESA astronaut Adam and their relationship really does come front and centre in the closing moments of this episode.  I was quite happy that they didn’t go for the inevitable step of killing one of them off, which would have felt like a major misstep to me.    Gabriela starts off as pretty annoying but I did begin to warm to her by the episode’s conclusion, whilst Suki Cheng’s about-face was suitably surprising, although I did feel that the death of Aramu, her assistant, wasn’t really handled terribly well.  I did like the fact that the Praxeus infection had come to Earth from an alien civilisation who wanted to use Earth as a petri dish, and the Doctor’s outrage at this was suitably well played by Jodie Whittaker.

I’m a sucker for a scientist.

The Praxeus infection is well brought to life by some great special effects and good direction, which makes the infection feel like a real threat.  The birds carrying the infection are suitably creepy – there is certainly something unsettling about birds moving in a flock like they do here.  Even though the cause of their infection is undeniably Earth-based, the fact that the Praxeus infection has been brought by an alien influence makes this story potentially more palatable than the Dregs in Orphan 55.  The scaling effect of Praxeus is really nicely done and the way that its victims explode certainly makes it memorable.  It almost goes without saying in this era, but the show looks absolutely beautiful, with the show making full use of filming in South Africa again. 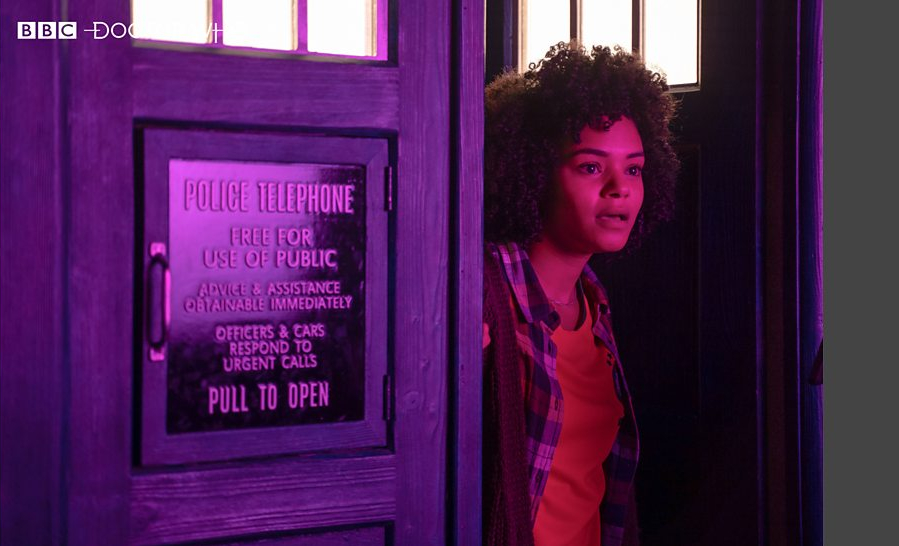 Verdict: A strong outing albeit with some reservations but good FX work and a story with something for all of the main cast and guest cast to do! 7/10

I think the moment with Graham having the device the wrong way up in his hand is probably my highlight.

The VFX effects used for the Praxeus infection are also pretty good.

THAT’s why you smell of dead bird! I though you’d changed your shower gel. 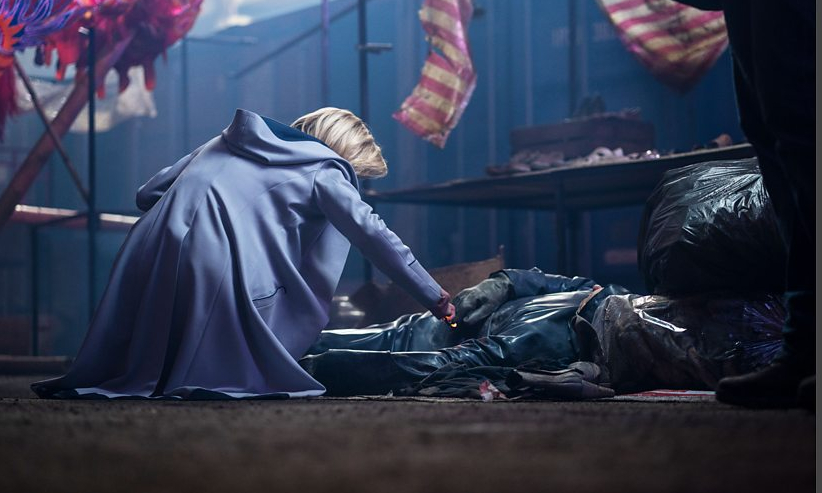