This review contains spoilers for Fugitive of the Judoon. If you have not seen it yet, please return once you have watched it! 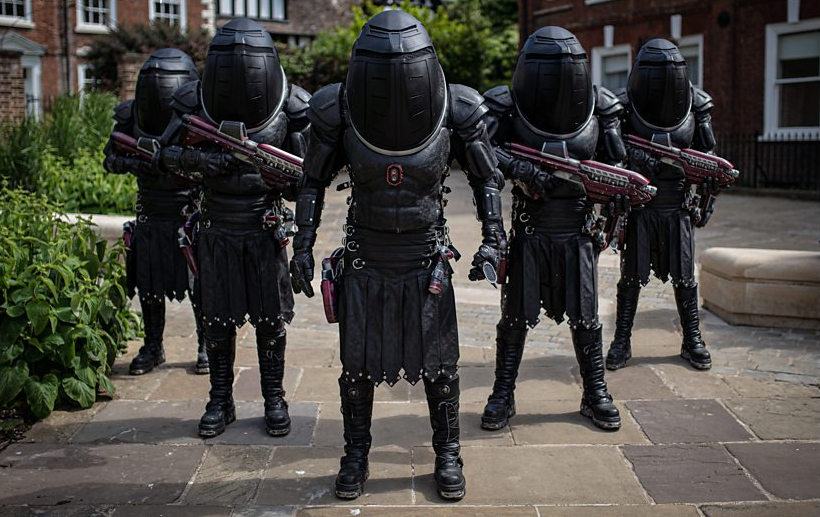 The Doctor and her companions are drawn back to Earth when the Judoon start to attack Gloucester looking for a fugitive.  Can the Doctor protect the city?

We’ve reached the mid-way point of Series 12, and goodness gracious, this episode certainly teases of big reveals to come.  We had the surprise return of a fan favourite character, which would in any other circumstances be the headline here, however, other revelations come to light which means that it pales into insignificance.  This review will be getting into some serious spoiler territory, so please look away now if you haven’t seen it yet!

Going into this story, we knew that we were getting one returning alien in the shape of the Judoon.  The rhino-headed ‘trigger happy’ police mark their first major appearance since their debut, and they really form a sort of narrative shorthand here which allows the story to progress.  Despite being the titular antagonist, they do seem to disappear from the narrative for quite a large period of time and their defeat in this story seems largely rushed – at some point I thought that I’d missed the announcement that this was a two-part story.  Still, it’s nice to see them return and we get some insight into how their society works when Ruth breaks the horn off the lead Judoon.  I suppose, unlike the Daleks or the Cybermen, they don’t have so many avenues to go down and it is difficult to find something different for them to do – but I do quite like the fact that they immediately think that they will get paid twice for accidentally delivering two Doctors!

Something that took me quite by surprise was the return of Captain Jack Harkness!  Part of me had written off ever seeing Barrowman return to Doctor Who so it is great to see him back.  It took me by surprise so much that I did not recognise his voice when Graham appeared on the stolen ship.  It’s a shame that we did not get to see him interact with the Doctor, but I do get the feeling that he’ll be back and his conversations with the companions is great fun – more like his initial appearance in The Empty Child than some later era Torchwood.  With his dire warning delivered to the companions of the threat posed by ‘the Last Cyberman’, this could be seen to be a bit derivative of the ‘You Are Not Alone’ message delivered to the Tenth Doctor by the Face of Boe, however, it is probably a wise move to tease another returning monster.  The door is certainly left open for Jack’s return and given Barrowman’s fondness for both the show and the character, I can’t see it being long until we see the immortal former Time Agent returning.  The one thing I would say is that his little subplot did not contribute too much to the story, but it’s nice to be reminded that this character is out there in the universe getting into trouble!

Just tell her this.  I’ll see her again.  Maybe not soon.  When she needs me, I’ll be there.  In the meantime…tell her…beware the Lone Cyberman.  You don’t know what a Cyberman is yet, do you?

An empire of evil…in ruins right now…brought down to nothing…finally.  But that could all change if she doesn’t listen to this message.

Then we come to the reveal of something potentially huge.  The mild-mannered Ruth is revealed to be an earlier incarnation of the Doctor, and going from her TARDIS interior, it is possible that she is an incarnation predating William Hartnell’s incarnation.  That being said, this all might be some level of subterfuge and this particular individual might just be an imposter.  I personally saw the twist of the Doctor using the Chameleon Arch coming a couple of miles off, but I was unsure about which other Time Lord either Lee or Ruth may be. There was some misdirection, especially when the Doctor discovers her TARDIS buried underground and Ruth opening a box containing a laser rifle, which was really well directed.  Nida Manzoor deserves plaudits  We also encounter another Time Lord in the form of Gat, and it is nice to see a minor Gallifreyan appear as an agent of a mysterious higher power, also from the past.

The Doctor and her companions spend a lot of this episode separated here, which I feel might be preparing us for an impending departure of one, some or maybe even all of them.  As with the majority of this series, I feel that there is enough to warrant having three companions and the story uses this well, to allow us to spend enough time with the Doctor and Ruth before the episode’s big reveal and equally we don’t feel shortchanged with the amount of time we spend with Jack.  It is important for the story for Ruth to feel like a real person, so the delving into her ‘fake’ past is necessary for the audience to buy into her as a character, and the misdirection that Lee is the fugitive is given enough weight to feel potentially viable. When the Doctor and her companions are reunited, we get one of the most affirming moments for this TARDIS team.  I really like the fact that we are starting to see a different side to this Doctor, evidenced when we see her snap at her companions at the beginning and the end and her malaise seems to be showing no signs of ending.  I’m not the biggest fan of Ryan, but his speech to the Doctor at the end of the episode is really well delivered by Tosin Cole and it’s possible that I’m warming to him – maybe just in time before he potentially leaves?

Verdict: A really enjoyable return for the Judoon which sees the return of another familiar face and a mindblowing twist.  9/10

The moment that Graham arrives on the ship that Jack has stolen – and we hear that voice.

Time is swirling around me.  The Master, Captain Jack Harkness, Ruth.  Something’s coming for me.  I can feel it.

Ryan…I’ve livevd for thousands of years, so long I’ve lost count.  How long have you been here?  You don’t know me.  Not even a little bit.

The best person we know.

And whatever is coming for you, we’ll be here.  Cos we’re your mates.