You and I are scientists, Professor.  We buy our privilege to experiment at the cost of total responsibility.

Picking up a distress call from the edge of the known universe, the Doctor and Sarah Jane find themselves on Zeta Minor, where a geological team have been nearly wiped out.

Planet of Evil is a story that arguably suffers from being flanked by better known and iconic serials in Series 13 and I was certainly pleasantly surprised on watching it.  Whilst it certainly wears its influences on its sleeves, it benefits from some amazing set design by Roger Murray-Leach and direction by David Maloney, along with strong performances from Tom Baker and Elisabeth Sladen and most of the guest cast.

The story is perhaps most clearly influenced by The Strange Case of Doctor Jekyll and Mister Hyde by Robert Louis Stevenson, with both the titular planet and Sorenson from the third part onwards having multiple personalities.  It also takes ideas from Forbidden Planet, the team from Monestra coming to investigate a missing team and the design of the id creature.  The story itself is relatively simple but it is quite compelling and certainly kept me gripped for its run time, and even has a decent cliffhanger at the end of Part 3 (albeit with a naff resolution) that sees the Doctor and Sarah seemingly being ejected out into space.  Writer Louis Marks brought the anti-matter element into the story and it is interesting to note how different this use of it is to The Three Doctors and Arc of Infinity.  It is also enormously to the story’s benefit that it doesn’t feel tedious when the ship is unable to leave Zeta Minor and the crew are refusing to listen to the Doctor and Sarah.  Something that did really stand out to me is that the story goes to the effort to show that the Monestrans have funeral traditions in a brief scene in Part 3, which really makes them feel more fleshed out than a simple humanoid race.   The conclusion is underwhelming, however, and I understand that it was a late change to have Sorenson survive the story at the request of Philip Hinchcliffe.  Regardless of whether the character survived the events of the story or not, it doesn’t change the fact that he was ultimately a tragic character.

It’s crazy.  The thrusters are at full power.

The answer’s really very simple.  You’ve come to the end of your piece of elastic.

Vishinsky, Salamar and The Doctor

The story benefits from high production values, especially with the design of the forest of Zeta Minor designed by Roger Murray-Leach.  The sinister and foreboding design makes the planet feel like a character in itself and the extensive work that doubtlessly went into the planning and making of the forest cannot be understated.  It certainly looks as real a world now as it would have done at the time of broadcast and made me for one feel as though it went on beyond the limits of the set.  The direction certainly helps the eerieness of the forest – there is so little distinction between day and night on this planet that means that there is almost a constant sense of uneasiness whenever the characters are on the planet.  Additionally, the spacecraft sets are quite effectively used and the effects used to make Sorenson’s eyes glow and the id creature are really rather effective. 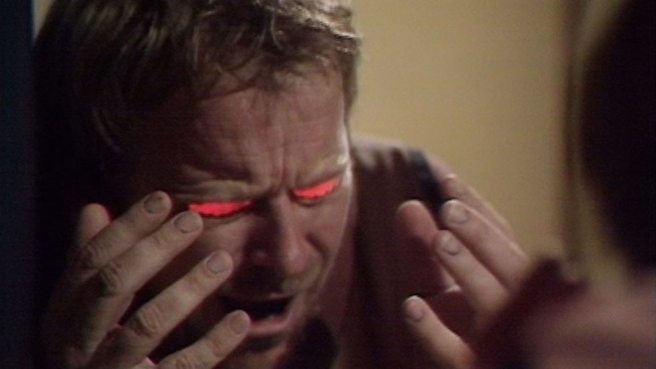 The performances of Tom Baker and Elisabeth Sladen are exemplary here, and it is easy to see why they are regarded by many as the quintessential Doctor and companion pairing.  There is no Harry Sullivan shaped hole in this story which is to the story’s credit – as much as I like Harry, there would not have been enough for him to do here.  The Doctor is suitably incredulous and full of wide-eyed wonder throughout and he feels completely comfortable in this role.  Sladen, on the other hand, is sold rather short by the story, reduced a simple role as a messenger for the Doctor for large parts of the story, but equally, she has come to grips with Sarah.  Sladen’s reduced role is potentially worse because she is also the only female character in the production.  Amongst the guest cast, Sorenson and Vishinsky stand out as positives, with Frederick Jaeger convincingly capturing the emotional trauma of the experiences his character has been through on Zeta Minor.  Ewen Solon is likable as Vishinsky and performs admirably against a variable Prentis Hancock who seems to be largely wooden for most of the story and potentially a better performance would have increased my interest in their power struggle.

Verdict:  A solid if unspectacular story, Planet of Evil benefits from some amazing production design and solid performances.  7/10

Sarah’s walk through the forest is very atmospheric and creepy as she goes to look for the Doctor in Part Two.

The closing shot of the TARDIS spinning away into space at the end of Part 4 is beautiful.

Here on Zeta Minor is the boundary between existence as you know it and the other universe which you just don’t understand.  From the beginning of time it has existed side by side with the known universe.  Each is the antithesis of the other.  You call it “nothing”, a word to cover ignorance.  And centuries ago scientists invented another word for it.  “Antimatter”, they called it.  And you, by coming here, have crossed the boundary into that other universe to plunder it.  Dangerous… 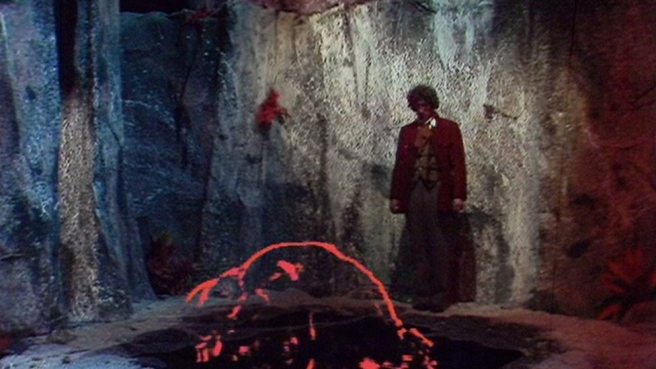 One thought on “Planet of Evil”