The bear will not pursue us – such things happen only in the theatre.

The arrival of a mysterious comet heralds impending danger from enemies old and new.

Silver Nemesis is another story, like Time-Flight, where a poor reputation can’t help but damage your impression of it going in.  As anniversary specials go, it certainly feels very different to its predecessors marking the 10th and 20th anniversaries respectively.  Sadly, I found that the reputation is well founded.  It feels very derivative of Remembrance of the Daleks, a story in the same season, and I’d far rather think of the season 25 opener as the anniversary special.  I made the mistake of watching the behind the scenes documentary on the DVD and the writer irritated me so much, so that might explain why I’m not very favourably disposed towards it!

One of the major problems with this story is that there are just too many villains.  You’ve got the Cybermen, De Flores and his neo-Nazis and Lady Peinforte and Richard from 1638.  The Cybermen are more than capable of carrying a story on their own and Lady Peinforte is ‘essential’ to this mess of a story, and considering that we had seen a neo-Nazi group in Remembrance, De Flores’ Nazis could have been scrapped with little to no impact on the plot.  It would certainly save us from Anton Diffring’s disinterested performance throughout this story.  The abundance of villains means that it feels like there are large amounts of time where the story just completely stops for them whilst another group to do something.  This means that the Cybermen feel as though they are just there to be cannon fodder, especially considering the seeming abundance of gold that most characters just so happen to have on their person.  Their entrance into the story at the end of Part One and their fight sequence at the beginning of Part Two are nicely done, but for the rest of the story it certainly seems that they are unable to hit a barn door.

There is something that staggers me about the creation of this story.  The writer, Kevin Clarke, was able to call up the Doctor Who production office and get the 25th-anniversary story having never previously written for the show makes my mind genuinely boggle.  Add to that the fact that when he first spoke to John Nathan-Turner, Clarke admits that he did not have any idea of the story he wanted to tell and blagged it and he was not laughed out of town seems ridiculous.  Ultimately, this is a remake of Remembrance of the Daleks in the same season.  The idea of a comet with powerful and desirable contents returning to Earth at 25-year intervals thanks to a previously unseen (presumably Second Doctor) intervention by the Doctor is an intriguing one outside of this context, but along with the neo-Nazis and the conclusion, where the Nemesis weapon is both of Gallifreyan design and used to destroy the Cyber fleet just feels repetitive.  Clarke set out to reveal that the Doctor is, in fact, God, however, this idea seems to get largely lost through the narrative, only returning in the concluding moments when Lady Peinforte reveals that she knows the truth.  Ultimately it feels as though Clarke and the production team took a handful of ideas, threw them at the wall and went from there. 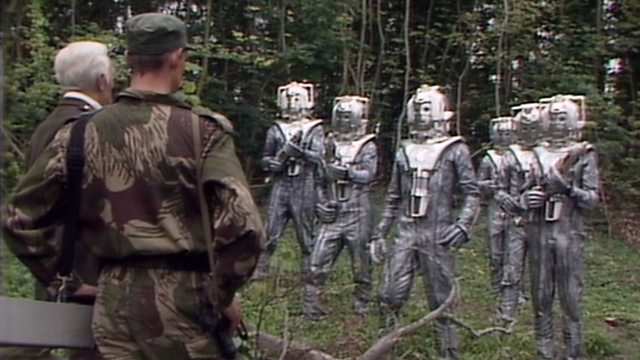 Nowhere can this be best exhibited by the celebrity casting of Dolores Gray as the American tourist – I still don’t really understand why she was there – and the whole fake Queen debacle, which just feels ridiculous.  I felt that it harkened back to McCoy’s first season which was incredibly uneven and McCoy delivers a performance to match when he struggles to place where he knows the Queen from.  Surely, once the production team knew that they would be unable to get Prince Edward or any royal involvement, it would have been pretty easy to completely write out this bit.  Dolores Gray doesn’t really look like she knows why she is being asked to be in this story and the scenes in her limo are quite painful to watch.  The cameo by Courtney Pine and the members of his quartet works the best of all of them and the opening scenes with the Doctor and Ace enjoying a break from traveling are probably amongst the best in the story which is largely bereft from good directing.  The exceptions to this are the first appearance of the Cybermen and I quite liked the Cybermen chasing Ace in Part 3 through the factory.  Ultimately though, the story feels as though it has delusions of grandeur of being a better and more important story than it ultimately is, and that is certainly the impression I got of how the writer considers this story.

Normally in Doctor Who stories that have fallen flat for me, I am able to at least find solace in the performances of the Doctor and companion, however, the Seventh Doctor and Ace largely fall flat for me here.  I gather that this may have been due to lack of rehearsal time for this story and general exhaustion on the part of McCoy and Aldred, however, it does really stand out for me here.  There are some moments between the pair that do work – I particularly like the scene with Ace and the Doctor passing the bow around the Cybermen in the castle basement and Ace admitting to the Doctor that she is scared of the Cybermen are all nice moments that can get lost in this disaster.

Verdict: Silver Nemesis feels like rehash of things that worked better in this season’s opening story, and is not helped by having too many villains, uninspiring direction and flat performances from the two leads. 1/10

It is really difficult to pick a best moment here.  I am going to go for the chase scene in Part 3, as it actually woke me up towards the end of this story.

You fool.  Without the bow, the statue’s power is nothing.

We will shortly obtain the bow.

From tbe Doctor? Don’t delude yourself.  He’s no common adversary.  Do you think he will simply walk in here and hand it over?

Yes, here we are.  I’m sorry we couldn’t have been here earlier, but we got held up on the way.