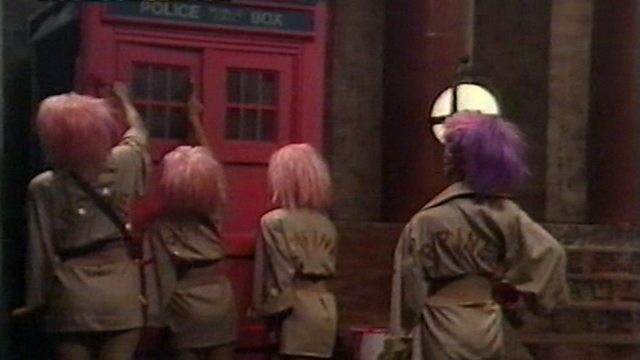 I can hear the sound of empires toppling.

The Doctor and Ace find themselves on Terra Alpha, where Helen A and the Happiness Patrol have made being miserable a crime.

The Happiness Patrol is perhaps one of the clearest examples of an ambitious story not having an appropriate budget, ultimately effectively meaning that the story suffers as a result.  The fundamental idea behind the story is fantastic in its simplicity – the idea of happiness being compulsory is something that you could imagine a child thinking of – however, it is executed quite well through the story.  I even quite like the Kandyman as he contributes to the story feeling like a fairy tale.  It’s just a shame that the sets and some of the lighting decisions seem to have fundamentally let down the story.

Some state that this is one of the stronger episodes of the McCoy era and I can certainly see that they are correct.  However, there are some elements that really do not work.  Sadly the special effects really let the story down, like Helen A’s pet, Fifi, who looks distinctly cheap.  It certainly feels as though Remembrance of the Daleks used up the vast majority of the budget for this series and it really shows in the set designs here, where the floors of the streets of Terra Alpha are clearly undecorated studio floor.  The scenes in both the Kandyman’s lab and Helen A’s rooms also seem really overlit, which doesn’t help when there clearly wasn’t the budget to make decent looking sets.  This story also presents a contrast in McCoy’s portrayal of the Doctor, with him being really superbly dark in scenes with the two snipers or when he is faced with Sheila Hancock’s Helen A, to contrast with him hamming it up performing on the steps of the forum.  Ace is also underused here and disappears from the story for long periods.

You see, I make sweets.  Not just any old sweets, but sweets that are so good, so delicious that sometimes, if I’m on form, the human physiology is not equipped to bear the pleasure.  Tell them what I’m trying to say, Gilbert.

He makes sweets that kill people.

The Kandyman and Gilbert M

As stated earlier, I really like the basic premise of the story.  There are elements that are brilliant in their simplicity, like the Kandyman.  Some may have problems with the design of the android, but I think it is quite in keeping with the tone of the rest of the story and I find him very creepy – possibly something to do with the voice.  Like the idea of people having to be happy, the idea of sweets that kill people is one that is again effective in its simplicity – it almost feels like something that might have come from a Roald Dahl novel.  I do find the story quite dark really, with the Happiness Patrol employing undercover people to find the ‘Killjoys’, which have drawn parallels with the political environment surrounding homosexuality in the 1980s.  Yet again, the Seventh Doctor comes into a dictatorship led society and brings it crashing to its knees. 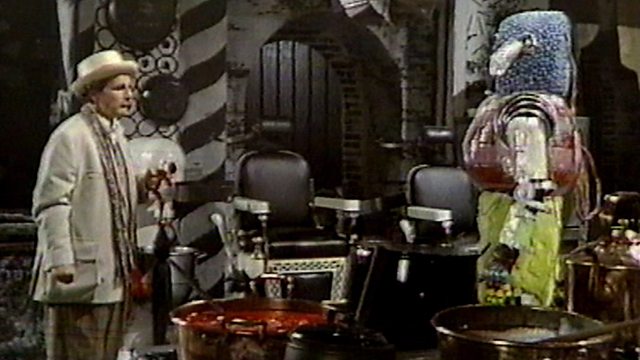 Sheila Hancock’s Helen A is perhaps one of the most famous attacks on the government in the show’s history.  Despite not being intended to be a satire, Hancock apparently found the comparison uncanny and used elements of Thatcher in her characterisation of the villainous leader of Terra Alpha.  She is perhaps the best part of this story, a truly flawed antagonist for the Doctor.  The scene at the end of the story where she finally breaks down and weeps over the dying body of Fifi is almost enough to make you feel sorry for her.

Verdict: The Happiness Patrol is one of the high points of the McCoy era, however, a lack of available funds really does damage this story.  7/10

The Doctor and Helen A’s confrontation in the streets to the end of part 3.

Yes, I imagine he will.  You like guns, don’t you?

This is a specialised weapon.  It’s designed for roof duty.  Designed for long range.  I’ve never used one close up before.

No.  In fact…let him come a little closer.

Stay where you are.

Why? Scared? Why should you be scared? You’re the one with the gun.

You don’t, do you?  Throw away your gun.

2 thoughts on “The Happiness Patrol”