Death, always death!  Do you think I want this carnage?

In an attempt to get Ian and Barbara back to 1963, the TARDIS arrives in the outskirts of Paris in 1794, one of the bloodiest years of the French Revolution.  The TARDIS team rapidly get caught up in the actions of James Stirling, an English spy working within the Conciergie Prison.

As someone who spent every holiday in France until the age of 16, French history has always been of interest to me, to the point that when I went to University, I chose to study modules about the Hundred Year’s War and the French Revolution.  When I heard that the first-ever season of Doctor Who closed with a story set in the Reign of Terror, which is one of the bloodiest and grimmest times in French history, I was surprised and intrigued.  I am pleased to say that I did enjoy this story, albeit with some reservations, and think that it closes the first season off really nicely. 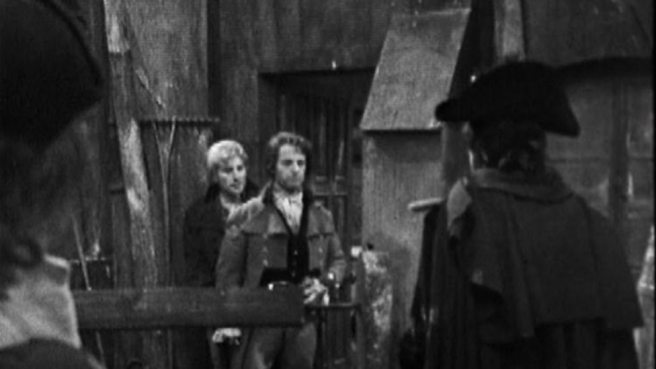 Despite being broadly positive towards it, I do have some issues.  The majority of the guest performances are really good, however, James Cairncross as Lemaitre or the spy James Stirling seems really wooden and there doesn’t really seem to be much difference between Stirling and the Revolutionary he is supposed to be undercover as.  It’s probably for the best that he gets largely sidelined in the last part.  The story is also quite repetitive in places, with the companions seemingly walking in and out of the revolving door at the Conciergie Prison, with Susan spending most of the story here.  The story does try to explain this by saying that Stirling is in control of the movements of the companions but it isn’t really that convincing.  There are liberties taken with history which does not bother me too much but the meeting between Barras and Napoleon to discuss the removal of Robespierre seems like a conscious effort to crowbar him into the narrative in some way as a familiar figure for viewers to cling to.  This story also gets criticised for simplifying the period and making it almost black and white in its depiction of Royalists and Revolutionaries, which I understand to a certain extent.  In a show like Doctor Who, it is difficult to portray moral grey areas which existed on both sides, and whilst on the surface the Aristocrats are portrayed as being uniformly good and the Revolutionaries are evil, the story does go to measures to point out that Jules is not an Aristocrat.

As stated above, the majority of the performances are strong here, and this is a strong story for William Hartnell.  We see that he has softened since the beginning of the season, although he is still capable of moments of great anger, such as his heated discussion with Ian and Barbara at the beginning of the story.  He is also still prone to fits of violence, as he knocks out the supervisor of the road workers, which is something it is difficult to think of the Doctor doing today.  Of the guest cast, Keith Anderson as Robespierre and Tony Wall as Napoleon are probably the stand-outs, despite how unnecessary Bonaparte’s inclusion is for the story.  The companions are good here too, with Susan not too shrill this time and another strong outing for Barbara and Ian.

You can’t influence or change history.  I learnt that with the Aztecs.

The events will happen, just as they are written.  I’m afraid so, and we cannot stem the tide.  But at least we can stop being carried away with the flood!

Barbara Wright and the First Doctor

Dennis Spooner’s story is obviously well researched and he makes the wise decision to inject some humour with the character of the jailer and the team of workers on the road that the Doctor encounters on his way to Paris.  I also like the fact that we never seen the guillotine – the shots we do see are stock footage and we never actually see any executions or set ups for them.  Similarly to The Aztecs, the TARDIS team are not here to interfere with events and they must let history run its course, and the previous story is nicely alluded to in a conversation between the Doctor and Barbara late on.  Despite the repetitions of characters constantly getting captured and imprisoned, this story kept me engaged throughout its running time and this is impressive given its near three hour run time.  The story also benefits from high production values which help the story look good.  This is particularly evident in one of the earliest scenes in the story where the soldiers arrive at the house, where the costumes look perfect for the era and I love the fact that they aren’t gleaming – they are dirty which helps make this world feel lived in.  Additionally, this story did have a troubled production (for more information about this, it is detailed in my ‘Behind the Scenes section below) but it feels seamless – this really feels like a gleaming example of what the ‘pure’ historical Doctor Who story can be.

Verdict: A solid conclusion to the first season of Doctor Who and a good contribution to the ‘pure’ historical subgenre of the show.  Hartnell and the main cast do good work here and the whole production feels really smooth and professional. 8/10

Parts: 6 (A Land of Fear, Guests of Madame Guillotine, A Change of Identity, The Tyrant of France, A Bargain of Necessity, Prisoners of Conciergie)

The scene in the first part where the Army find the Aristocrats in the house on the way out of Paris.

What are we going to see and learn next, Doctor?

Well, unlike the old adage, my boy, our destiny is in the stars, so let’s go and search for it..

Ian Chesterton and the First Doctor