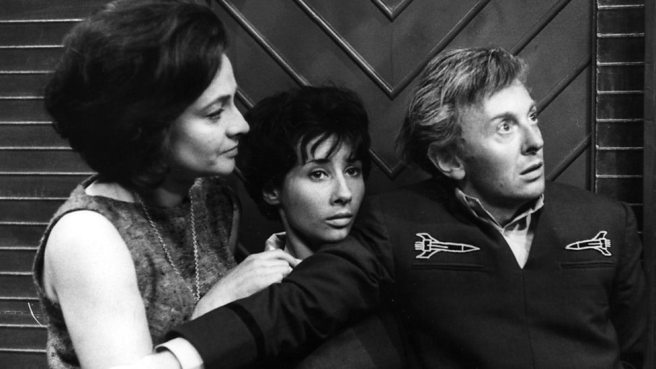 Did you know, his hair was almost white?

Nothing wrong with that!

Maitland and the First Doctor

The Doctor, Ian, Barbara and Susan arrive on a spaceship, finding a human crew who are suffering from telepathic interference from a race called the Sensorites.

The Sensorites deserves some plaudits for being the first episode explicitly set in the future and introducing a largely non-antagonistic titular alien race, however, it does seem to be a bit of a mess.  There’s just too much going on within the narrative, and none of the various plot elements really grabbed me resulting in me ultimately feeling bored well before the story’s conclusion.

One of the story’s few positivesPossibly the story’s only positive is that this story continues a positive upturn in William Hartnell’s portrayal of the Doctor.  He is far and away more likable at times here than he is in his opening scenes in An Unearthly Child, especially when you consider scenes like the TARDIS team reminiscing about their adventures in the opening episode of this story.  To a fan of the modern show, Hartnell feels much more like a traditional Doctor, making sure that nobody is in doubt about his lines in the sand – he even mentions his attitude towards weapons at one point.  He has utterly changed, and there are still flashes of steel from this incarnation, especially when he is talking to the Sensorites about the lock on the TARDIS door. There are a few fluffs here from Hartnell, but this seems to be much more spread around the rest of the cast as well – I know that there were restrictions on the number of edits the production team could make in the 1960s, however, there do seem to be a lot in this story.  Hartnell’s personality drastically changes back to the more cantankerous old man in the final scene of the story, which does feel really jarring. 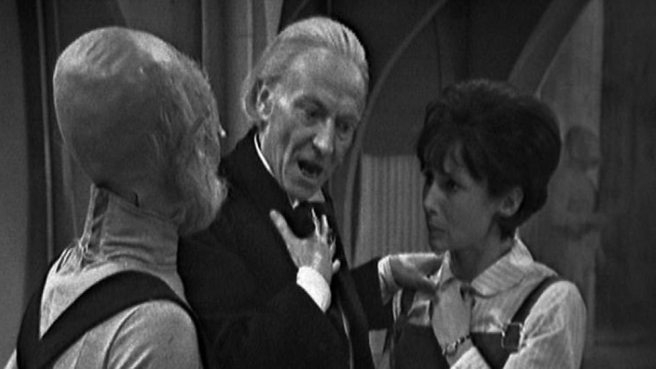 I also quite like the Sensorites.  The fact that the actors cast as the Sensorites are all the same height and of similar builds really does help the idea that they would need the system of sashes to differentiate from each other, although it does massively stretch credibility that nobody ever thought of disguising themselves as another Sensorite.  I love how atmospheric the cliffhanger is at the end of the first part, with no sound until the reveal of the alien, which I find to be really effective, and they do genuinely feel terrifying, especially when we see the effects of the telepathic interference on characters like John and it is a good performance from Stephen Dartnell. The reveal of the Sensorites completely pays off on what we are told by Carol and Maitland in the opening parts and they are certainly suitably alien. It is interesting for the show in its early days to give us aliens who aren’t evil but instead good and possibly slightly childish, apart from the devious City Administrator.

The biggest problem with this story is that the plot feels extremely muddled.  There are several elements – the Sensorites being poisoned and Ian also succumbing to this and the political maneuvering of the City Administrator feel utterly superfluous and inconsequential.  There is a moment where the City Administrator frames the Doctor for the death of the Second Elder that feels so lacking in any impact that it is no real surprise that the Doctor suffers no repercussions for this allegation.  The multiple plots do ultimately cause the story to drag and feel much longer than it actually is, with elements like what lurks in the aqueduct being put on hold until the Doctor has cured Ian’s illness.  This leads to the ultimate finale of the story feeling utterly underwhelming, and I’m not sure whether the blame lies at the hands of the writer or the script editor – I don’t think much blame can be pinned on Mervyn Pinfield, as there’s not really very much when there is no intrigue.

Verdict:  A story that has an interesting premise, introducing a race of aliens who are not necessarily all evil, sadly The Sensorites is let down by a bit of a slow plot.  I do like the design and concept of the Sensorites though.  2/10

Probably the cliffhanger at the end of part one – the lack of sound is utterly eerie.

It all started as a mild curiosity in the junkyard and now it’s turned out to be quite a great spirit of adventure.

One thought on “The Sensorites”