Every conversation with you just goes mental.  There’s no one else I can talk to. I’ve seen all that stuff up there.  The size of it.  And I can’t say a word.  Aliens and spaceships and things.  And I’m the only person on Earth who knows they exist.

Rose returns to Earth, only to find that the TARDIS has returned them a year after she originally left with the Doctor.  At the same time, a spaceship crash lands in the Thames, smashing through Big Ben in the process, and there are mysterious happenings at Number 10 Downing Street.  The Doctor is required.

Aliens of London is the first time that the revived series really feels like it stumbles.  It may just be one of my least favourite episodes of Doctor Who that I have seen so far.  There is absolutely no subtlety here, with the story seeming like it’s been directed as an out and out comedy.  With the exception of Eccleston, Piper and Wilton, all the cast seem to be playing it for laughs.  Doctor Who doesn’t need to take itself too seriously, and a good fart joke isn’t in itself a massive problem, but the story doesn’t seem to know when to stop.  There are other elements of the episode that don’t work so well as well, but I’ll delve into them in more depth in this review. 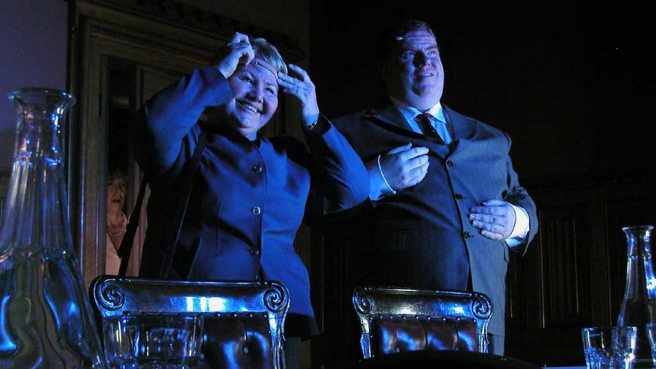 The Slitheen are really the elephant in the room so I will address them first.   I don’t mind the idea of shapeshifting aliens, but the added element of the flatulence is a joke that wears thin far too quickly, and it isn’t aided by the performances of the three main actors portraying the human forms of the Slitheen.  Lines like “I’m shaking my booty” and “would you rather silent but deadly?” just make me cringe, which is partially down to the writing and partially down to their delivery, but combined, it leaves a bad taste in my mouth.  Part of me wonders why they didn’t think of bringing back the Zygons if they were going to use shape-shifting aliens – the production team obviously weren’t afraid to bring back ‘B list’ aliens, as they brought back the Autons in Rose.  I think if the direction and the actors treated the Slitheen slightly more seriously, they would be slightly less jarring to me – everything in the first series has been at least treated as a serious threat, but the treatment of the Slitheen makes them feel decidedly lightweight.  It is fine that they treat their plans on Earth as a bit of fun and a joke, but the fact that the episode itself does too seriously undermines them.

Another issue I have with this story is the fallout from Rose’s missing year, although I have to say I love the reveal at the start of the episode, more specifically the way Murray Gold’s score starts off bright and optimistic and slides into a minor key which puts the viewer on edge.  Jackie is pretty one-dimensional in her reaction to the reappearance of Rose, and thinking long term, this doesn’t really have very much impact on the relationship between Jackie and the Doctor going forward to the end of the Tyler’s time on the show.  In a way, Martha’s mother, Francine, has a much more understandable reaction after learning about the Doctor in The Lazarus Experiment than Jackie does here.  She is just angry and shouting constantly, which is understandable, but there are no hints of sorrow in this performance.  Coduri is just shrill, which just sets my teeth on edge, but I don’t think it is entirely her fault.  Again, there is no nuance to either the writing or the directing and her character suffers as a result.   The treatment of Mickey is also a bit ridiculous.  We’re led to believe that Mickey has been questioned about Rose’s disappearance and treated as if he murdered her for almost an entire year.  The story only briefly delves into the effect that this would have on a person, and Rose just asks him if he’s been seeing anyone else whilst she’s been gone.  If Mickey is going to be treated as the comedic “idiot”, which the story wants to do here too, judging by the scene in which he runs to the TARDIS whilst it is dematerialising and crashes into the wall behind it, then there’s little point in adding this detail to his character.  It goes without saying, but Mickey being suspected for Rose’s murder and Jackie’s treatment of him during this year is never explicitly mentioned again after this two-parter.

Yes.  And then a spaceship crashed in the middle of London.  I think the schedule might have changed.

Fortunately, some of the cast are treating it as serious drama.  Eccleston, Piper and Wilton give decent performances whilst the story crashes around their ears.  Penelope Wilton gives Harriet Jones suitable gravitas and she is likeable enough, even when asked to repeatedly churn out that “Harriet Jones, MP for Flydale North” line which is initially amusing but wears thin quickly.  This is yet more evidence of Davies not knowing when to stop flogging a dead horse.  It is also really lovely to see Eccleston getting to investigate and discover on his own in this story, which is something we don’t really get to see him to do much of.  I love the Doctor’s equal disdain for the aliens who created the “mermaid” space pig and the soldier who shoots it dead, which for me is the strongest part of the episode.  I am going to put in an honourable mention for the scene where the pig is trying to break out of the morgue, which pays a rather obvious homage to Paul McGann’s regeneration scene in the TV Movie, which I only really noticed on this occasion! Billie Piper also helps to keep the story grounded, and these three performances perhaps save this story from me giving it a lower rating.

Verdict: Aliens of London might just be one of the weakest episode of the revived series.  Repeated jokes and extremely broad performances make this one to forget about as quickly as possible – the rest of the series does, anyway!  2/10 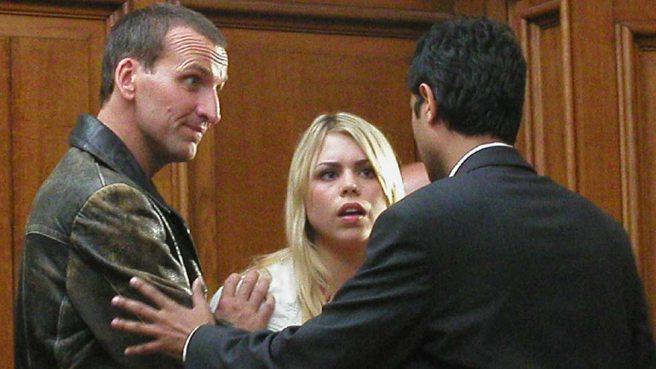 The scenes where the Doctor is off investigating at the hospital, especially when he expresses his disgust at what the space pig is, comparing it to a “mermaid” and his anger at the U.N.I.T. soldier for shooting it dead.

Excuse me, would you mind not farting while I’m saving the world?