You lot, you’re everywhere!  You’re like rabbits!  I’ll never get done saving you.

River Song recruits the Doctor to track down the last of the Weeping Angels, who caused the crash of the Byzantium starliner and has escaped into the Maze of the Dead on Alfava Metraxis.

After the success of Blink, we get the return of the Weeping Angels in this fast-paced and gripping first part of the story.  We see an increase in the powers of the lonely assassins here and the new introductions work well alongside the established abilities from their prior story.  We also see the first reappearance of Alex Kingston as River Song, and I am a massive fan of her chemistry with Matt Smith, as well as establishing her as someone who killed ‘a good man’ – even at the time, it seemed blindingly obvious that this would turn out to be the Doctor!

The Weeping Angels established themselves as one of the best things to come out of the revived series, and this story cements them as one of the Doctor’s most intimidating foes.  The Time of Angels also demonstrates that, just with all the best enemies, one of them is more than enough of a threat.  The additions to the mythology only seem to increase their threat, with the image of an Angel itself becoming an Angel a simple yet well-executed idea that creates one of the most memorable scenes with Amy stuck in the dropship with the videotape of the Angel.  We also see a more sadistic and malevolent side to them here, with them breaking Angelo, Marco and Bob’s necks, and stripping out Bob’s vocal cortex to allow the Angels to taunt the Doctor.  The plot, to revive an army of Weeping Angels using leaking radiation from the Byzantium’s engines, leads to a fantastically tense climax with one of the best cliffhangers in Doctor Who history.

The direction by Adam Smith is really superb as well, aided by a story that cruises along with an almost frenetic pace from the cold open.  Speaking of the cold open, it is one of my favourite scenes in the episode, feeling a bit like the opening sequence from a James Bond film, and I especially like how it cuts between River being chased by Alistair’s guards to the Doctor and Amy being chased by museum security.  Another highlight is the scene with Amy in the dropship, which, thanks to Smith’s direction feels really tense and scary.  I feel that the reveal that all the statues in the Maze of the Dead are degenerated Weeping Angels works as well as it does because we are only ever allowed really fleeting glimpses of them by Smith’s direction, which means that the majority of the audience come to the same conclusion as the characters at around the same time, which builds an impending sense of dread in the story.

I feel that it would be negligent to not give Steven Moffat’s writing a fair share of the credit in giving the story the breakneck pace that works to its benefit.  There are some cracking bits of dialogue as well, and I particularly enjoy the scene in the TARDIS with River flying the TARDIS, which he wrote in a hurry.  Although these scenes and River being able to fly the TARDIS were seen as being controversial at the time, they are great fun.  It should also be applauded that he didn’t rely on the same aspects of the Weeping Angels as in Blink, with them feeling more fleshed out in their second appearance, which in part is down to not relying on the same gimic as the prior story.  As can be expected in his stories, the dialogue really sparks and there are some fun bits of misdirection and evasion, especially when hinting at the nature of the relationship between the Doctor and River.

Are you all Mr Grumpy Face today?

A Weeping Angel, Amy, is the deadliest, most powerful, most malevolent lifeform evolution has ever produced and right now one of them is trapped inside that wreckage, and I’m supposed to climb in after it with a screwdriver and a torch – and assuming I survive the radiation long enough and assuming the ship doesn’t blow up in my face – do something incredibly clever which I haven’t actually thought up yet.  That’s my day.  That’s what I’m up to. Any questions?

Is River Song your wife?  ‘Cause she’s someone from your future.  And the way she talks to you, I’ve never seen anyone do that.  She’s kind of like, you know “Heel boy.”  She’s Mrs Doctor from the future, isn’t she?  Is she going to be your wife one day?

Amy Pond and the Eleventh Doctor

The relatively small cast here also produce superb performances, and the chemistry between the three main leads is superb. I really like the dynamic between Matt Smith and Alex Kingston as the Doctor and River Song respectively.  Smith has just the right level of awkwardness to pull off what the story demands of him and Kingston bosses her scenes – there are nice little moments like the fact that she hangs her heels on the TARDIS screen which really help her to feel in control.  Meanwhile, Karen Gillan is great at teasing the Doctor about the mysterious relationship with River and has a great relationship with her too.  The scene where Amy and River talk about the Doctor whilst he pretends not to listen is a fantastic example of this, highlighting the nice dynamic that this trio have.  Of the guest cast, Iain Glen stands out in particular as the leader of the Clerics, Father Octavian, giving this part the gravitas and authority that his rank deserves.  He really taps into the Doctor not having to deal with the consequences of his mistake when his men die, which is a really small part of this superb episode, but Glen gives it the right level of emphasis to make sure that these lines really resonate. 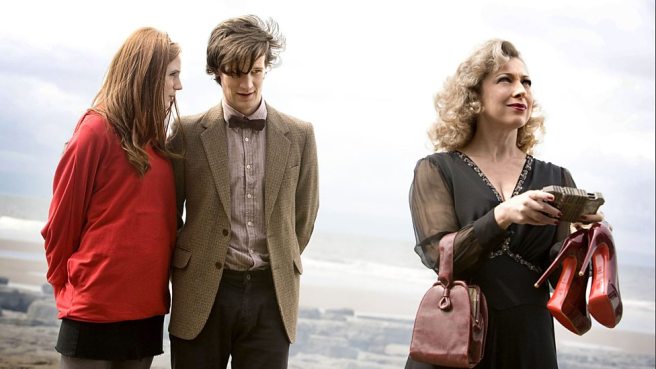 Verdict:  The Time of Angels manages to live up to the high standard set by the Weeping Angels’ first appearance, thanks to a good plot and fantastic pacing.  10/10

The opening sequence, with River Song escaping the Byzantium and the Doctor and Amy in the museum.

Sorry, can I ask again? You mentioned a mistake we’d made.

And what would that be, sir?

Angel Bob and the Eleventh Doctor