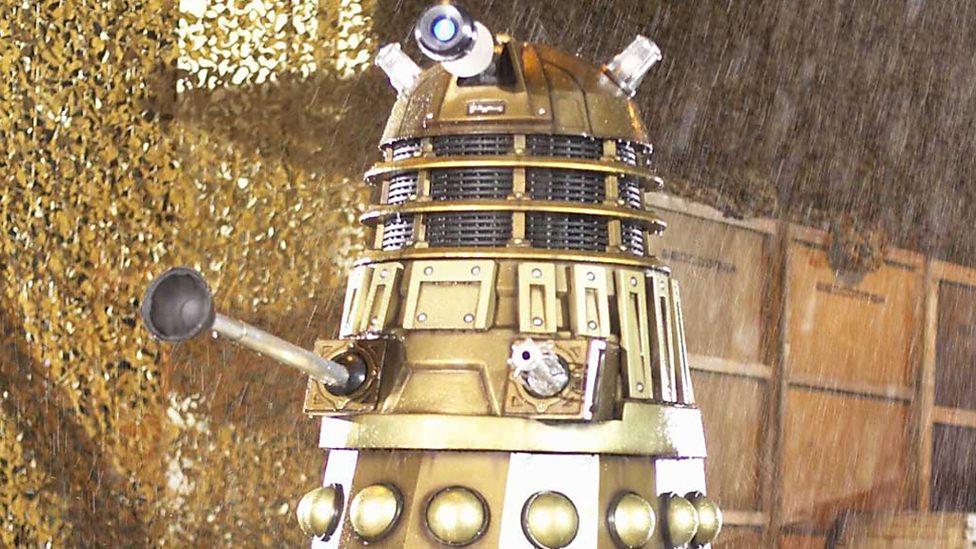 The stuff of nightmares, reduced to an exhibit.  I’m getting old.

The Doctor and Rose arrive in an underground bunker in the United States in 2012 in response to a distress signal, where alien collector Henry Van Statten is keeping his latest find – the last Dalek in existence.

The Daleks are almost as essential to Doctor Who as the TARDIS and the titular hero.  Even in the TV Movie, they are heard but not seen, even if the Dalek voice is a bit questionable.  So looking back on Dalek in hindsight, it seems bizarre that there was a possibility that the Daleks would not appear when Russell T Davies and Julie Gardner brought Christopher Eccleston to our screens in 2005.  Even when you think about the Daleks coming back, it would be far too easy to overcomplicate this story by shrouding the return of the Daleks in large swathes of continuity from the previous stories that have gone before.  So it is still refreshing that Dalek is such an effective reintroduction to the evil pepper pots, whether this is your first time viewing, or simply the latest in many revisits.

In a way, this story cements some things that were introduced in the Daleks’ final appearance in the original TV run, Remembrance of the Daleks.  They are again seen to be masterful tacticians, and obviously, there’s the fact that they can get up the stairs, perhaps putting that over-used joke finally to bed.  The Dalek here is also shown to be manipulative as well, manipulating Rose into seeing something completely different to what the Doctor sees when he first sees the captive Dalek – a cruelly treated prisoner.  The director, Joe Ahearne deserves a huge amount of credit for making the Dalek seem as threatening as it does here, as the Dalek feels just as threatening and menacing when it refuses to reply to Van Statten as when it is moving through the bunker exterminating everyone in its path or talking to the Doctor.  One of my favourite scenes is in the weapons development area of the base, where Van Statten has instructed everyone in the base to grab a weapon to try and stop the Dalek.  Instead of simply exterminating everyone by shooting them individually, the Dalek instead elects to elevate itself above the floor, shoots the fire alarm, which in turn activates the sprinklers, and with a simple blast of its weapon, shoots the wet floor, killing the majority of the people standing in its way.  There is a quiet majesty about the way the Dalek surveys the situation from its elevated position which is truly menacing. 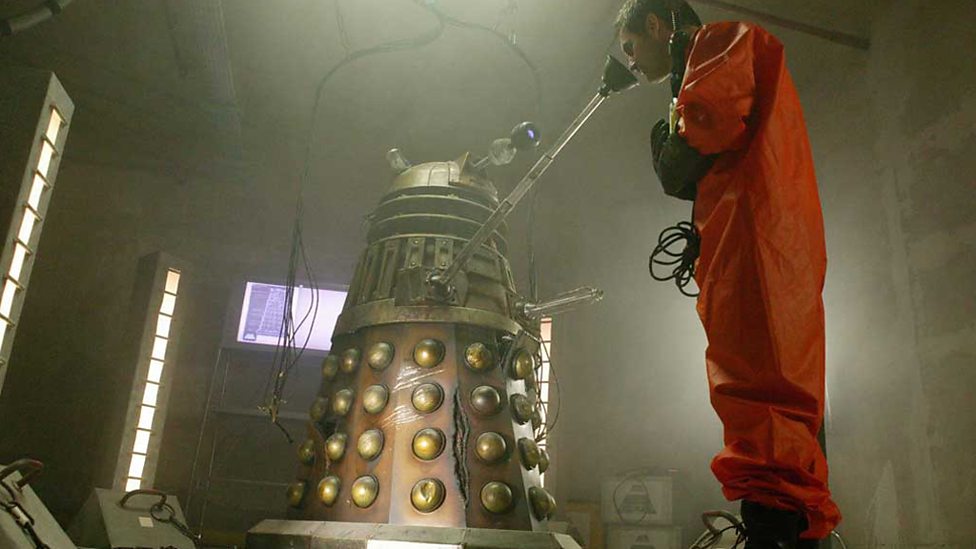 This story has to contain some of Christopher Eccleston’s best moments as the Doctor as he faces the last surviving Dalek of the Time War.  He is fantastic as the battle-scarred version of the Doctor and his reaction when he realises that he has been locked in a room with a Dalek, to his sudden switch when he realises that the Dalek is completely powerless, then to actually go against that famous maxim that the late great Terrance Dicks once wrote that the Doctor should never be cruel or cowardly by trying to kill the Dalek himself.  Eccleston really does sell this all so well, with this exchange and his discussion with the Dalek about the outcome of the Time War really standing out.  I feel that I also need to praise two other actors as making this such a great story: Nicholas Briggs and Corey Johnson.  Johnson is utterly believable as this all-powerful individual who doesn’t think twice about replacing Presidents and torturing aliens for not speaking to him, and shows this character as utterly contemptible, with the scene where the Doctor shows him the alien instrument telling the audience everything that we need to know.  And Nicholas Briggs gives a fantastic performance as the voice of the Dalek, whether it being simple screaming or talking normally (for a Dalek), with his voice bristling with menace.

Let me tell you something, Van Statten.  Mankind goes into space to explore, to be part of something greater.

Exactly! I wanted to touch the stars.

You just want to drag the stars down, stick them underground, under tons of sand and dirt, and label them.  You’re about as far from the stars as you can get.

Rob Shearman’s story is, as is well known, a loose adaptation of his Big Finish story for the Sixth Doctor, Jubilee, but the two are largely very different beasts and can stand alone on their own merits.  There are shared elements, such as the lone Dalek being tortured and appealing to the companion, in this case, Rose, resulting in a bond being formed between the Dalek’s greatest enemy and his companion.  Shearman’s greatest achievement here is strongly establishing for a new audience who may not, as strange as this may sound, be aware of the Daleks and their nature.  With this coming in the first series of the revived series, Shearman keeps the continuity light, however, does enough to ensure that the uninitiated are in no doubt that the Doctor and the Daleks have shared history.  There is even a sly aside about the Daleks’ creator, Davros, which is handled superbly, saying more about the character of Van Statten than delving deep into the show’s continuity – there is absolutely no need for the story to name drop Davros and the story wisely doesn’t.

I hope that my love of this story has come through in the preceding paragraphs, as I briefly turn to address an element of this story and the following story that I really dislike – Adam.  Established as a boy genius – parallels, of course, to Adric – Langley never really convinces me of this, and the scenes with him and Rose seem to really dull the pace of an overall frenetic adventure.  Ultimately, the fact that Adam even ends up travelling with the Doctor into the next story just feels so lazy that it does bug me sufficiently to write it up here.  The character feels like a complete non-entity and I don’t see why the Doctor doesn’t put his foot down and say no.  After all, it will only lead to trouble…

Adam was saying that all his life, he’s wanted to see the stars.

Tell him to go and stand outside then.

Rose Tyler and the Ninth Doctor

Verdict:  Ahearne, Eccleston and Briggs make the return of the Doctor’s oldest enemy rank among the strongest of the revived series, as well as one of the best stories to feature the Daleks.  10/10

You may have been able to guess from the way I described it above, but the scene in the weapons testing zone – I love how in command of that scene the sole Dalek is.

I am a soldier. I was bred to receive orders.

Well you’re never gonna get them.  Not ever.

They’re never going to come! Your race is dead.  You all burned – all of you.  Ten million ships on fire.  The entire Dalek race, wiped out in one second.

I watched it happen.  I madeit happen.

I had no choice.

And what of the Time Lords?

Dead.  They burned with you.  The end of the last great Time War.  Everyone lost.

And the coward survived.

Dalek and the Ninth Doctor 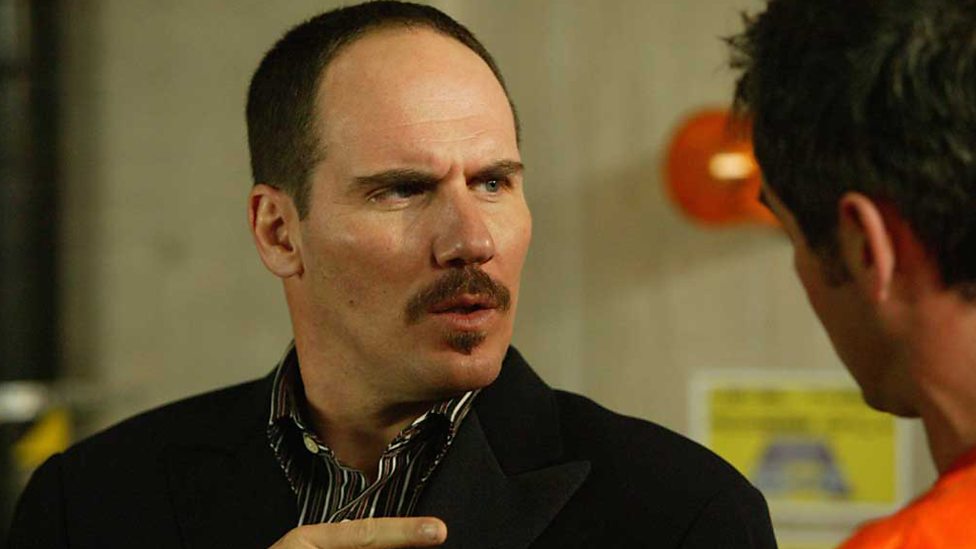