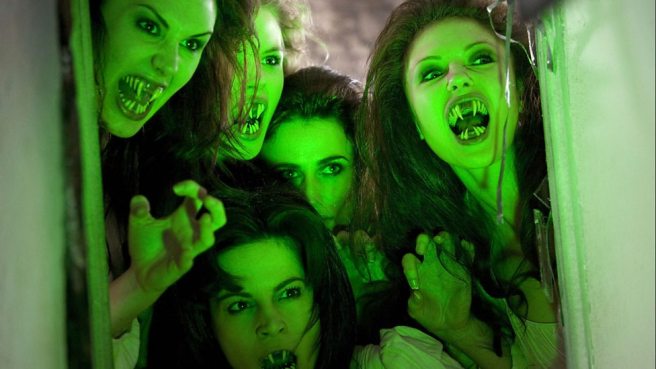 The life out there, it dazzles.  I mean it blinds you to the things that are important.  I’ve seen it devour relationships entirely…It’s meant to do that. Because for one person to have seen all that, to have tasted the glory, and then go back.  It will tear you apart.  So! I’m sending you somewhere.  Together.

The Doctor brings Amy and Rory to Venice in 1580 to allow the two to focus on their relationship, however, things are not as they seem.  There are reports of plague, despite the disease dying out previously and there are pale skinned girls in Venice who avoid sunlight, attending a school run by the mysterious Rosanna Calvierri.

Guest Reviews (an exclusive feature for this blog only):

“The Doctor shows up and meet Narcissa Malfoy, surprise surprise, she’s a bit of a witch.  Typecasting much?”

“There are vampires, but they aren’t vampires.”

Thank you Rob and Alice for your insights!

When I watched The Vampires of Venice for the purposes of writing my blog, I found myself to be pleasantly surprised.  I’d always regarded this story as being quite fun but throwaway, however, I felt much more positively towards it after this time.  Largely, I think this is down to bringing Rory on-board the TARDIS and Arthur Darvill gives a really strong performance.  The story does feel quite similar to stories in the RTD era to the point of potentially being derivative, however, in hindsight the story acts as part of an effective bridge between these two eras.

On the point of derivation, this story does feel quite familiar due to reusing quite a few of the Eccleston and Tennant eras, and even contains quite a few similarities to Whithouse’s first story he wrote, School Reunion.  We have the last of a species hiding on Earth within an institution and looking to make the Earth their new home, the introduction of the companion’s boyfriend as part of the TARDIS team and aliens disguising themselves as humans.  The over-familiarity of these plot elements certainly cause some issues, however, Whithouse and Moffat do something different with these elements to indicate a change in the era.  This most notable way this is done is with how the story treats Rory, and after a couple of series of having the Doctor posing as a romantic interest, it is a nice change of pace to see the Doctor trying to ensure that Amy maintains her relationship with Rory, despite how misguided his efforts may be.  This story really establishes Matt Smith’s Doctor as being an asexual alien rather than the confident romantic presented especially by the Tenth Doctor.  This incarnation doesn’t really understand human romantic relationships or social scenarios, indicated by his bursting out of the cake at Rory’s stag do, and telling Rory what a good kisser Amy is, for instance.

Rory! That’s a relief.  Thought I’d burst out of the wrong cake. Again.  That reminds me, there’s a girl standing outside in a bikini.  Could somebody let her in and give her a jumper?  Lucy.  Lovely girl.  Diabetic.  Now then.  Rory.  We need to talk about your fiancée.  She tried to kiss me.  Tell you what though, you’re a lucky man.  She’s a great kisser.

Arthur Darvill is a definite highlight of this episode, as the story forces him front and centre, with Karen Gillan taking a slightly reduced role.  Rory is somewhat different to other characters since the revival, as someone who is not afraid to question and challenge the Doctor, and unlike Mickey’s initial portrayal as a bit of an idiot, is clever and curious enough to research things like faster than light travel.  His dynamic with Matt Smith is really lovely too, and I especially like how deflated he looks when Rory states that he understands how the TARDIS is bigger on the inside.  Rory’s reaction to travelling with the Doctor obviously has an impact on the Time Lord, evidenced by the Doctor telling Amy to go back to the TARDIS towards the episode’s conclusion.  Despite Rory’s cowardice, he is shown to be brave too, challenging Francesco with a broom to protect Amy, and it is nice to see how differently Amy reacts to Rory’s decision to join her and the Doctor to how Rose reacts at the end of School Reunion to Mickey deciding to do the same.

As mentioned above, the Eleventh Doctor’s attitude to relationships is a drastic departure from his predecessor, and Smith characterises this perfectly.  Whithouse’s script really allows Smith to shine, showing both decent humour and some real steel.  His interactions with Rosanna Calvierri are superb, aided of course by the acting ability of his counterpart, Helen McCrory.  I like the fact that the Saturnyns know of both the Time Lords and the Doctor and are aware of his actions in the Time War as it makes this new villain feel much more of an equal to the Doctor.  I particularly like that indignation that leads the Doctor to state that he will bring the aliens down – they do not even remember the names of their victims.

The Saturnynes are a suitably creepy villain too, which owes a lot to some stylish direction and high production values.  The relationship between Rosanna and her son, Francesco, is played with explicit incestuous overtones, adding to the idea of Vampires as being quite a sexual creature anyway.  The “vampire” teeth are suitably creepy and the converted Venetian girls are quite scary and are made to look quite striking.  The ultimate tragedy of the fates of the gondolier Guido and his daughter Isabella really cements the Saturnynes as a real threat, and the suicide of Rosanna at the close of the episode is quite dark for this story, with her ultimate fate being torn apart by the remaining Saturnynes.

Verdict: A good fun, if slightly derivative, story, The Vampires of Venice is better than I remembered, with it being a really strong story for Rory. 8/10

It feels like a cheat to have my best moment be another quote, but it has to be

The people upstairs are very noisy.

There aren’t any people upstairs.

The Eleventh Doctor and Guido